The driver of the No. 7 SMP Racing Schmidt Peterson Motorsports Honda posted a tow-assisted best speed of 221.930 mph around the 2.5-mile oval, while the best no-tow speed came from Carlos Munoz in the No. 26 Andretti Autosport Honda at 219.613 mph.

But the track, dubbed the “Tricky Triangle,” lived up to its name during the session.

Three accidents have sent teams scrambling; Ryan Hunter-Reay and Charlie Kimball will go to backup cars after respective accidents in Turn 1 while Juan Pablo Montoya had a later accident off of Turn 2.

Hunter-Reay’s accident came as he lost the rear coming through Turn 1 in his No. 28 DHL Honda; it’s his second accident in practice after also having one at Iowa Speedway in July.

“We were just on a qualifying simulation. Trying to get a flat as possible and we just had it a little too far forward on the balance, and the front grabbed, but just a little bit, which is what I got away last week at the test here, and it was fine,” Hunter-Reay said. “The rear just all of a sudden snapped, and once these cars get to a certain angle you dump all that air off the wings that you’re relying on and you just can’t do anything about it.”

RHR car has made it back to the paddock. #ABCSupply500 pic.twitter.com/zcTAjtYYy9

Kimball had a more strange accident where he overcorrected in Turn 1, and his knees actually knocked the steering wheel out of the No. 83 Tresiba Chevrolet onto the course.

“I turned in (Turn One) and the rear came out on cold tires,” Kimball said. “We made an adjustment to the car. The car rotated a couple of times and I caught it. Maybe three times, but then I didn’t catch it any more.  But when I hit, my knee hit the back of the steering wheel and popped it off. It was an incident of the incident rather than anything else”

There's no steering wheel controversy: @racewithinsulin (Charlie Kimball) said his knee knocked it off during one of the impacts.

Montoya’s accident in the No. 2 Penske Truck Rental Team Penske Chevrolet came out of Turn 2, with a double hit as he then went to the inside.

“It was cold tires coming out of the pits. I was getting up to speed in the normal way for qualifying and they told me to hurry up because Simon was coming,” Montoya told Trackside Online’s Steve Wittich. “They are so worried about everybody else not doing our job that it’s just getting ourselves in a hole.”

Speeds are below; qualifying is scheduled for 1:30 p.m. ET and local time. A qualifying order is linked below as well. 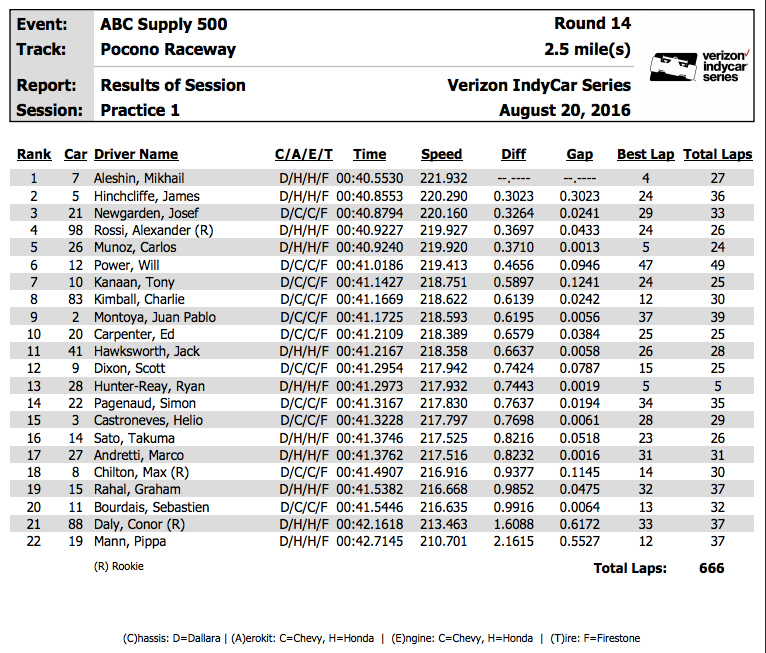