Indianapolis-based hhgregg, a home appliance, electronics, and furniture retailer that operates stores across 20 states, has been confirmed as lead, co-primary sponsor for Marco Andretti’s No. 27 Andretti Autosport entry in a multi-year agreement.

The car was revealed on Tuesday morning at Andretti Autosport’s Indianapolis shop, a day after the Verizon IndyCar Series teams and crews returned home following the rain-delayed ABC Supply 500 at Pocono Raceway.

“Our relationship with Andretti Autosport and Marco has been incredibly successful for both sides,” hhgregg CEO, Bob Riesbeck, said in a release. “As hhgregg continues to strive to deliver best-in-class product offerings, prices and customer service, we’re thrilled to be so closely connected with a brand that stands for excellence in its field as well. We’ve had a great experience with Marco and the team and are excited to be building a future together.”

“It’s great. It’s also great for IndyCar in general to have hhgregg investing in this way,” team principal Michael Andretti said during the announcement. “Thanks to this association, we will be able to move product, and we can put hhgregg in front of more people than what it is now.”

The @hhgregg car for @MarcoAndretti is revealed. @FollowAndretti #IndyCar pic.twitter.com/reXkbxOrvW

The announcement was for the lead, co-primary sponsor and what was left unsaid might be more important to the overall story.

This also confirms Marco Andretti back at Andretti Autosport, which isn’t a surprise, but formally confirms a contract extension after he’d only been on a one-year extension for 2016.

This means Marco Andretti and Ryan Hunter-Reay are Andretti Autosport’s two confirmed drivers for 2017, with both Hunter-Reay and sponsor DHL in a contract year next year owing to the end of their three-year extension announced at Milwaukee in August, 2014.

Carlos Munoz and Alexander Rossi are free agents, with Munoz peaking at the right time in what’s been his best of three years and with Rossi and his family and support team weighing his future, albeit doubtful to announce anything before the end of the season owing to his continued and sustained focus on the final three IndyCar races. 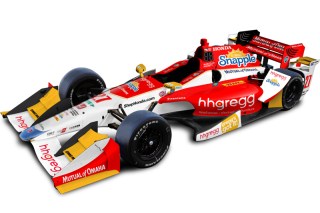 What isn’t pictured on the car? Note the difference between the 2016 hhgregg livery (right), which premiered in a primary role for Marco Andretti at Barber Motorsports Park this year, and the 2017 livery revealed today.

United Fiber & Data and Mutual of Omaha take on bigger signage on the engine cowling whereas Snapple, long an Andretti Autosport partner via its parent company Dr Pepper Snapple, is not visible.

Per a team spokesperson, Dr Pepper Snapple Group’s contract with the team runs through the end of the year. They’ve been a long and great, trusted partner for Andretti Autosport and as a company, are evaluating future plans.

Andretti Autosport has always tried to keep a four-car program as its way of operating in IndyCar and the goal would undoubtedly be to continue doing so in that way in 2017. Rossi, by way of his shock but still well executed Indianapolis 500 victory, has both Andretti Autosport and Honda’s lone victory this year.