The Race of Champions will make its first visit to the U.S. for the event’s next running; the all-star event won’t run in its usual December slot, but instead shifts to January in Miami next Jan. 21-22, 2017.

The event will now run one week before the traditional kickoff to the next year’s North American road racing calendar, the Rolex 24 at Daytona, which runs Jan. 28-29. The Roar Before the Rolex 24 runs Jan. 6-8.

All-star drivers from around the world in various disciplines of motorsport compete in the RoC. The release confirming the details is linked below: 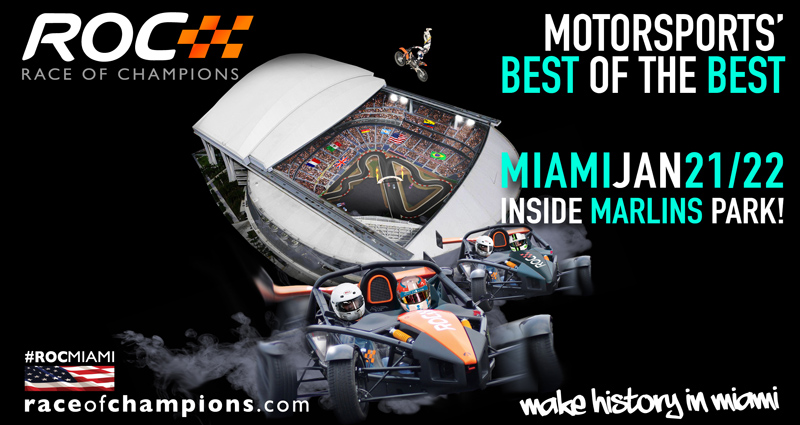 The Race Of Champions (ROC) is heading to the United States of America for the first time in its history after Miami’s Marlins Park baseball stadium won the rights to host the next ROC event on January 21-22, 2017.

Built in 2012, Marlins Park is the home of the Miami Marlins, the city’s Major League Baseball franchise. The stadium features a retractable roof and can seat over 37,000 fans, who are more used to watching fastballs than fast cars. It is set to host the 2017 Major League Baseball All-Star Game next July. Now it has seen off contenders from all over the world to stage the prestigious Race Of Champions, which will take place within the confines of the stadium itself.

Now the event is heading to the United States for the first time to soak up the heat of Miami. Florida’s sports fans will have a chance to watch the speediest action Marlins Park has ever seen as many of the world’s greatest drivers push to the absolute limit on a specially-designed racing track winding its way around the outfield.

The Race Of Champions is an annual contest which has been held for over 25 years. It brings together some of the world’s greatest drivers from motor sport’s major disciplines – including Formula 1, NASCAR, IndyCar, Le Mans, MotoGP, World Rally and the X Games – and sets them free to battle head-to-head in identical machinery.

Germany’s four-time Formula 1 world champion Sebastian Vettel took his first ROC Champion of Champions title in London last year after many years of trying. Now he will return to defend his crown in Miami – but first he will have to see off motor sport’s finest competitors from all over the world.

Vettel said: “I’m very happy to have finally won the individual Race Of Champions title last year in London’s Olympic Stadium and I look forward to defending my title at ROC in Miami. All the drivers are strong, and the top US drivers from NASCAR and IndyCar will certainly be extra motivated to win in front of their home fans now that the event is being held in their country for the first time.

“This will also be the first time ROC has been held in a baseball stadium so I’m curi-ous to discover the new track layout. But as always it’s the same track and identical cars for everyone so only driver skill makes the difference. The racing at ROC is al-ways very intense and the head-to-head duels often decided by fractions of a se-cond, so it’s just one strategy; flat out from start to finish!

“The Race Of Champions reminds us a lot about why we all first started racing; it’s about pure competition. The competition is very intense on the track and everyone wants to win, but it’s also about putting on a great show for the fans. I think all the drivers who have had the honour to participate in ROC fell in love with the event. It’s a privilege to be invited and to be able to come back.”

The first American drivers to sign up for ROC Miami have been unveiled as NASCAR champion Kurt Busch, driver of the #41 Monster Energy, Haas Automation Chevy and 2014 Indianapolis 500 winner and 2012 IndyCar champion Ryan Hunter-Reay.

They both have fine pedigrees of their own at the Race Of Champions. At Barbados in 2014 both Busch and Hunter-Reay topped their groups in style with three wins out of three en route to the quarter-finals. Now both drivers can look forward to soaking up the adulation of their home fans as they slug it out to take Vettel’s crown in Miami.

Busch said: “I’m honoured to once again be invited to the Race Of Champions. I had a great time last time out in Barbados and given that this year’s event will be in the US, it will make it that much more exciting. In addition, representing the US in my country will be special.

“The ROC is a particular challenge that tests versatility and adaptability with little margin for error. If the format was not challenging enough, you throw in World Champions from all kinds of disciplines, with various types of cars, which makes for a good recipe. And no matter how much we all like to say it’s ‘just for fun…’ we all want to win this prestigious event.”

Hunter-Reay added: “I’m delighted to be making my fourth straight appearance at the Race Of Champions – and especially this time with the event taking place on American soil, better yet my own backyard!”

“It is a spectacular event and a unique challenge to jump in and out of all the different cars as you go head-to-head with some of the best drivers in the world, it is a tremendous honor to be selected as a competitor for ROC. I’m proud to represent America, IndyCar and the Indy 500 and I look forward to hearing the noise of the crowds in Miami and feeling that hometown support.”

The Race Of Champions is run over two days: first comes the Race Of Champions itself (on Saturday January 21) with a flat-out battle for individual glory. Then on Sunday January 22 it’s the ROC Nations Cup when drivers pair up in teams based on nationality to bid for the title of ‘World’s Fastest Nation’. All the racing takes place in a stunning range of superfast cars.

But that’s not all. The Race Of Champions is a non-stop action event from start to finish and also features stunt shows on four wheels and two plus DJs, cheerleaders and plenty of other entertainment to keep the race fans on the edge of their seats. Tickets for both days of action have gone on sale today from http://www.raceofchampions.com.

ROC President Fredrik Johnsson said: “We are thrilled to be bringing the Race Of Champions to the United States at last. Miami’s Marlins Park is a wonderful venue and it’s our first time inside a baseball stadium. Rest assured we will put together a truly memorable event for fans of fast cars and even faster drivers.

“American race fans are passionate about their sport and I’m sure they will enjoy the great competition and shows we put on. We look forward to welcoming a packed crowd to enjoy the sight of some of the world’s best drivers battling it out. If you like non-stop action, noise and excitement, the Race Of Champions is the perfect event for you.”