The 2017 Verizon IndyCar Series schedule has been released on Thursday, which follows on from INDYCAR President of Competition and Operations Jay Frye’s thought process that the calendar would come out “sometime in August” and is definitively earlier than in recent years.

It also features a clear road map for the next two years with most dates and tracks pretty much established through 2018.

A number of tracks or series had already released 2017 IndyCar dates, so today’s release only produces a handful of extra announcements that weren’t already known inside the beltway.

Twelve dates and 13 races were already known either from tracks or other series that have released elements of their 2017 calendars. Additionally, start times for NBC Sports Group’s NASCAR races in the second half of this year gave an idea of what time IndyCar races could start as well.

Otherwise, this is a pretty similar and pretty good schedule for IndyCar in 2017 – which fittingly, will have 17 races.

“The release of the 2017 Verizon IndyCar Series schedule continues to build upon the success INDYCAR has experienced the last three years and establishes continuity and consistency in our event calendar,” Mark Miles, CEO of INDYCAR parent company Hulman & Co., said in a release.

“As a series we are working diligently to create long-term relationships with our promoters to establish date equity and to provide them with the opportunity to initiate ticket renewals and event promotions earlier, which is pivotal to continuing the increase in attendance at our events.”

Per that release, INDYCAR has experienced a 38 percent growth in both television ratings and viewership from 2013 to 2015 and the same numbers are up this season by a total of 7 percent compared to this time last year. Attendance at INDYCAR events is also on the rise, with six events this season drawing crowds at or near record highs.

Broadcast times and start times will be finalized at a later time.

The Mazda Road to Indy will also be present on most of these weekends. But the Andersen Promotions-run and operated three series is yet to put out its full 2017 calendars. 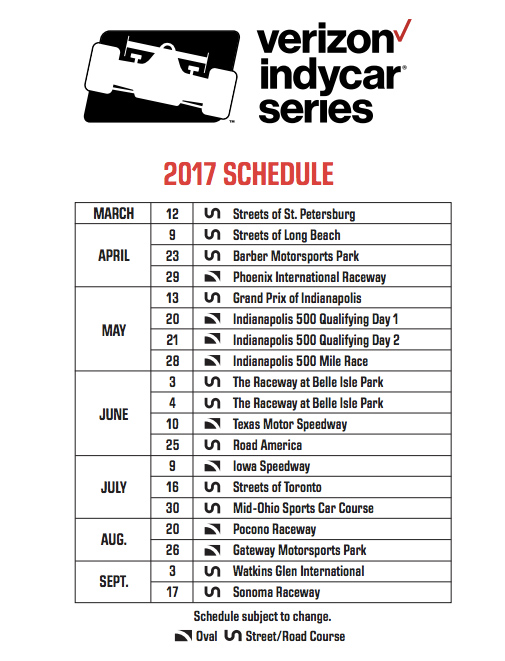