This weekend’s Michelin GT Challenge at VIRginia International Raceway is a good one for the IMSA WeatherTech SportsCar Championship; it gives the GT Le Mans and GT Daytona classes a race to shine while the Prototype classes (Prototype & Prototype Challenge) are off for the week.

Series previews from IMSA are posted below:

Virginia’s Tommy Milner looks to continue momentum from Road America, where he charged from fifth to first in the closing five minutes of the race to give the No. 4 Corvette Racing Chevrolet Corvette C7.R co-driven by Oliver Gavin its fourth victory of the season.

“I have lot of great racing memories at VIR, and it would be great to add another with our fifth win of the season in the No. 4 Chevrolet Corvette,” said Milner, a native of Leesburg who now resides in Ashburn. “This is a track that is really fun to drive. It’s incredibly fast, it’s flowing and has a couple of really good elevation changes. A GT-only race is a nice dynamic for us, where we have a chance for an overall win. The most important thing we can do, though, is score as many points as possible.”

After opening the season with GTLM victories in the Rolex 24 At Daytona and Mobil 1 Twelve Hours of Sebring Fueled by Fresh From Florida, Milner and Gavin saw their lead trimmed during a midseason three-race winning streak by Ford Chip Ganassi Racing drivers Ryan Briscoe and Richard Westbrook. The Corvette returned to the top of the victory podium at Lime Rock Park, and now leads Ford by 13 points, 264-251. Third in the points is the No. 3 Corvette Racing Chevrolet Corvette C7.R of Antonio Garcia and Jan Magnussen, which has three podium finishes this season.

Ford Chip Ganassi Racing will be looking to rebound from the late-race disappointment at Road America in the VIR debut of the exciting Ford GT. In addition to winning three races, Westbrook and Briscoe have scored five consecutive podium finishes in the No. 67 Ford GT. Teammates Joey Hand and Dirk Mueller – seventh in the points in the No. 66 Ford GT – were GTE Pro class winners at the 24 Hours of Le Mans in June.

Porsche North America is looking to repeat its 1-2 finish in last year’s Michelin GT Challenge. Patrick Pilet and Nick Tandy return in the winning No. 911 Porsche 911 RSR, while Earl Bamber will be joined by Frederic Makowiecki in the No. 912 entry.

“Last year, Porsche celebrated a commanding double victory in Virginia, and there is no greater incentive than that,” said Pilet, who went on to capture the 2015 GTLM championship. “VIR is one of those traditional racetracks deep in the heart of America that I particularly look forward to. It’s fast and demanding, and if you make a mistake as a driver, you pay the price immediately.”

Ferrari also has a solid track record at VIR. Risi Competizione followed up an ALMS victory in 2013 by scoring a last-turn, last-lap victory in the inaugural WeatherTech Championship race in 2014. Last year, the team placed third behind the Porsches with a Ferrari 458 Italia. This year, Giancarlo Fisichella and Toni Vilander will co-drive the No. 62 Ferrari 488 GTE, which will race at VIR for the first time.

BMW Team RLL has new cars for the Michelin GT Challenge as well, fielding a pair of BMW M6 GTLMs. Bill Auberlen and Dirk Werner are fifth in the championship in the No. 25 IHG Rewards Club M6. John Edwards and Lucas Luhr share the No. 100 BMW, and are coming off their first podium finish of the season at Road America.

Christina Nielsen and Alessandro Balzan have won two races in 2016 GTD competition in the No. 63 Scuderia Corsa Ferrari 488 GT3, and hold a 15-point lead with only three races remaining entering Round 10 of the 2016 IMSA WeatherTech SportsCar Championship (live, FS1, 1:30 p.m. ET).

“I really like VIR,” said Denmark’s Nielsen, who joined Balzan in winning GTD races at Sebring and Watkins Glen in 2016. “I think it’s a classic, old-school American circuit. There are quick corners and a quick flow, so you have to be really precise.”

While Townsend Bell and Bill Sweedler won the 2015 Michelin GT Challenge in a Scuderia Corsa Ferrari 458 Italia, Nielsen finished second in an Aston Martin Vantage. Teaming with Scuderia Corsa in 2016, she and Balzan have scored five podium finishes and placed in the top 10 in seven of eight races.

“We had a good result at VIR last year – it was a lot about strategy,” Nielsen said. “It will be interesting to see how our strategy will play out this year.”

Second in the standings, trailing 243-228, is the Magnus Racing tandem of Andy Lally and John Potter, who were class winners in the Rolex 24 At Daytona and at Lime Rock Park in the No. 44 Audi Tire Center/Auric Solar Audi R8 LMS GT3. Audi also has a pair of Stevenson Motorsports entries, with Robin Liddell and Andrew Davis scoring a pair of runner-up finishes in the No. 6 Stevenson Automotive Group Audi R8 LMS GT3, joined by Lawson Aschenbach and Matt Bell in the No. 9 Audi.

Alex Job Racing finished on the VIR podium last year. Mario Farnbacher returns in a new car – the No. 23 Team Seattle/Heart of Racing Porsche 911 GT3 R. He and co-driver Alex Riberas have combined to capture a series-leading four TOTAL Pole Awards and were winners at Mazda Raceway Laguna Seca.

Ben Keating and Jeroen Bleekemolen are two-time GTD winners in 2016, coming home first at Detroit and the most recent race at Road America in the No. 33 Riley Motorsports ViperExchange.com/Cruising with the Monkey Dodge Viper GT3-R. Also competing in a Dodge Viper, Lone Star Racing returns with Dan Knox and Mike Skeen co-driving the No. 80 ACS Manufacturing entry.

Lamborghini will be making its WeatherTech Championship debut at VIR this weekend. Paul Miller Racing’s Bryan Sellers and Change Racing’s Spencer Pumpelly are TOTAL Pole Award winners this season. Sellers and Madison Snow gave the manufacturer its first podium finish by taking third at Canadian Tire Motorsport Park in the No. 48 Castrol Edge/Universal Industrial Sales Lamborghini Huracán GT3. Pumpelly co-drives with Corey Lewis in the No. 16 Pertamina/Monster Energy Lamborghini, while Dream Racing fields the No. 27 Lamborghini for Lawrence DeGeorge and Cedric Sbirrazzuoli. 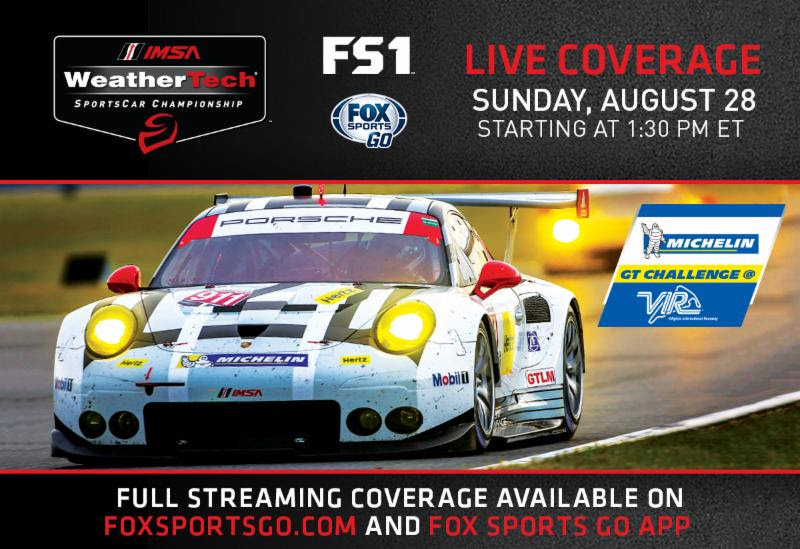 Practice for the Michelin GT Challenge begins at 11:30 a.m. ET on Friday, August 26, with qualifying at 11:55 a.m. on Saturday. The weekend also includes the IMSA Continental Tire SportsCar Challenge, racing on Saturday at 1:55 p.m. ET, plus the Lamborghini Blancpain Super Trofeo and Porsche GT3 Cup Challenge USA by Yokohama.