Yes, “Jersey Shore’s” been off the air for a few years now but it doesn’t mean we can’t still make bad jokes trying to pivot from the MTV show to Red Bull Global Rallycross’ trip back to Atlantic City and New Jersey for this weekend’s eighth round of the 2016 season.

The 1.102-mile, 10-turn course at Bader Field is fast and long, the longest this season.

Swap Gym Tan Laundry (GTL) for Global Rallycross (GRC) and you have your answer to what intense action you’ll be seeing this weekend (Sunday, 3 p.m. ET, NBC).

“The Situation” in the points standings – as you were – is that Volkswagen Andretti Rallycross teammates Tanner Foust and Scott Speed are now separated by only six points, 350-344.

Foust won three of the first five final rounds in his No. 34 Rockstar Energy Volkswagen Beetle GRC before Speed’s won the last two in his No. 41 Special Operations Warrior Foundation Beetle; he made a last-lap pass of Brian Deegan at MCAS New River in that event’s lone race of a planned doubleheader, and then dominated the series’ most recent round at Washington, D.C. last month.

That’s seen Speed close to within six points after his first five races featured a few hurdles he needed to clear.

With the VARX pairing having won five of the first seven races this year, two Ford Fiesta ST drivers have bagged the other two wins. Patrik Sandell (No. 18 Bryan Herta Rallysport Ford) and Steve Arpin (No. 00 Chip Ganassi Rallycross Ford) won in Dallas and Daytona race one, respectively.

Arpin sits third in points with 315 points, while Sandell and Deegan are fourth and fifth at 299 and 293 respectively. With just four rounds remaining in the championship, Sandell and Deegan need to make headway this weekend and hope the VW twins are snookered with a bit of bad luck.

Literally no one has ever – or will ever – call 2014 Supercars champion Joni Wiman “J-WOWW,” even though he’s got the same initials, but it would be a “Wow” moment if either Wiman or Sebastian Eriksson can deliver Honda Red Bull Olsbergs MSE its first win of the season, which would be the first for the new Honda Civic Coupe that’s debuted this year. At a high-speed track, it could well happen. Eriksson and Wiman sit sixth and seventh in points and look to break into the top-five.

Austin Dyne and Nelson Piquet Jr. resume in their pair of Fords, Piquet again running for SH Rallycross/DRR after making his return to the team in Washington, D.C. The pair of Subarus (Sverre Isachsen, Bucky Lasek) would also figure to continue.

Bad jokes aside, the series’ trip to Bader should be a good one. A Boardwalk parade takes place on Friday.

Toby Moody and Anders Krohn have the call with Kristen Kenney reporting from the pits. 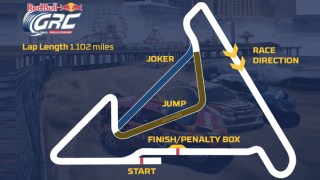