Fort Worth – After a 77 day wait, the Verizon IndyCar Series was back on track at Texas Motor Speedway to get ready for tonight’s Firestone 600.

The series took part in two, 10-minute practice sessions ahead of the race’s resumption.

The second session was was led by defending Firestone 600 winner Scott Dixon at 214.937 mph. His Ganassi Racing teammate Tony Kanaan was second quickest at 214.476 mph. Andretti had the third best speed overall.

James Hinchcliffe, who will be the race leader when it resumes, was seventh fastest overall.

The first 10-minute session had just began when the No. 14 of Takuma Sato broke loose in Turn 4 and hit the wall. Sato was able to leave the car under his own power and was later cleared to participate in the race.

Sato told the Indianapolis Star a right-front rocker broke on the car.

The No. 14 had to be towed back to the garage despite there not being any significant damage to the body of the car.

Sato out of his car under his own power. Will make the night for the Foyt 14 crew a thrash. #IndyCar #Firestone600 pic.twitter.com/lFH17dattr

James Hinchcliffe, who will be the race leader when it resumes, was seventh fastest overall. 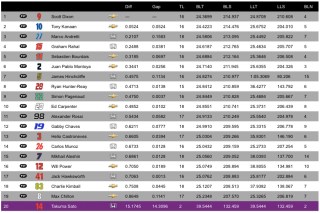