In a photo finish, Graham Rahal has denied James Hinchcliffe a near certain victory by just 0.0080 of a second at Texas Motor Speedway in the Verizon IndyCar Series’ resumption of the rain-delayed Firestone 600, postponed from June 12 to tonight, August 27.

Hinchcliffe, who was the restart leader on Lap 71, led most of the night – a total of 188 of 248 laps – except when it counted. Rahal surged to the lead on the final lap and edged past on the inside into Turns 3 and 4, and the held him off through the tri-oval even though he put his arm up early to celebrate. It was Rahal’s only lap led of the race, the first driver who accomplished the “lead only the last lap and win it” feat since Hinchcliffe in Sao Paulo, Brazil in 2013.

The difference between winning & going home. A winning margin of .008 is the closest in TMS history! #Firestone600 pic.twitter.com/DFyVFbWqAd

Tony Kanaan and Simon Pagenaud were third and fourth after also being a huge part of the win battle. At one point, the quartet went four-wide, with Pagenaud careful to as not affect his championship hopes while also understanding the desires of the other three drivers to win their first race of the year.

Ultimately there could only be one winner and it was Rahal, who restarted the race only in 12th but stayed out of trouble, and stayed on the lead lap, to get into contention in the No. 15 Mi-Jack/RLL Honda.

Hinchcliffe led the majority of the race after the restart, with the No. 5 Arrow Schmidt Peterson Motorsports Honda the dominant car on both speed and strategy in the race.

Following a Lap 164 pit stop, Hinchcliffe and strategist Robert Gue figured that with only 86 laps to go, they could make it home on one more pit stop, owing to the fact the tire degradation was not as significant as others. Additionally, with the Canadian having lapped most of the field up to the top five, there would be fewer cars to contend with as the race went on.

But a spate of accidents followed after Hinchcliffe pitted for what you figured would have been the final time on Lap 206.

The first contact came between Scott Dixon and Ed Carpenter, in what initially looked like Carpenter moving down on Dixon but upon a second replay, appeared actually more of a racing incident. As Carpenter took the second apex in the tri-oval, Dixon also moved up, and it sent Dixon spinning out of control into Turn 1 – and then back across the track where fortunately all other cars (except the seemingly luckless Helio Castroneves, who’s been a magnet for other car contacts this year) managed to avoid hitting him.

A less than pleased Dixon channeled his inner Will Power at Loudon in 2011 by giving Carpenter an infamous “double bird” salute. Carpenter continued and Dixon was done on the spot.

But Carpenter’s race didn’t last much longer, as he got loose exiting Turn 4 and crashed out, again collecting Castroneves. Max Chilton spun in avoidance to the infield grass on the tri-oval.

A third accident followed not long after when Mikhail Aleshin, who had only recently got back on the lead lap, also spun in Turn 4. Aleshin collected Jack Hawksworth, who had nowhere to go, and Chilton again managed to avoid it although he took to the pit lane.

The question throughout all of these yellows was whether any of the leaders would pit for fresh Firestone tires and Kanaan and Pagenaud were the ones who opted to do so.

The difference in tire strategies set up a thrilling – if perhaps tense – run to the finish and when the four race protagonists opted to go four-wide, it was a bit of throat in your mouth moment.

But Rahal cannily played his moves later. He’d tried going below the white line into Turn 3 a couple laps before the finish, to at least give himself an idea of how he could get by Hinchcliffe for the lead.

Once he did so, into Turn 3 on the inside on the final lap, he had just enough momentum to make it through ahead of Hinchcliffe, who fought back valiantly but just short of what would have been a thoroughly deserved win on the outside.

Kanaan was third, after another strong performance.

With Pagenaud fourth and Will Power picking the worst race to end his six-race first or second-place run of results – he ended eighth – Pagenaud bounced back in a big way from his Pocono crash on Monday.

Results are below, as are the unofficial points standings. 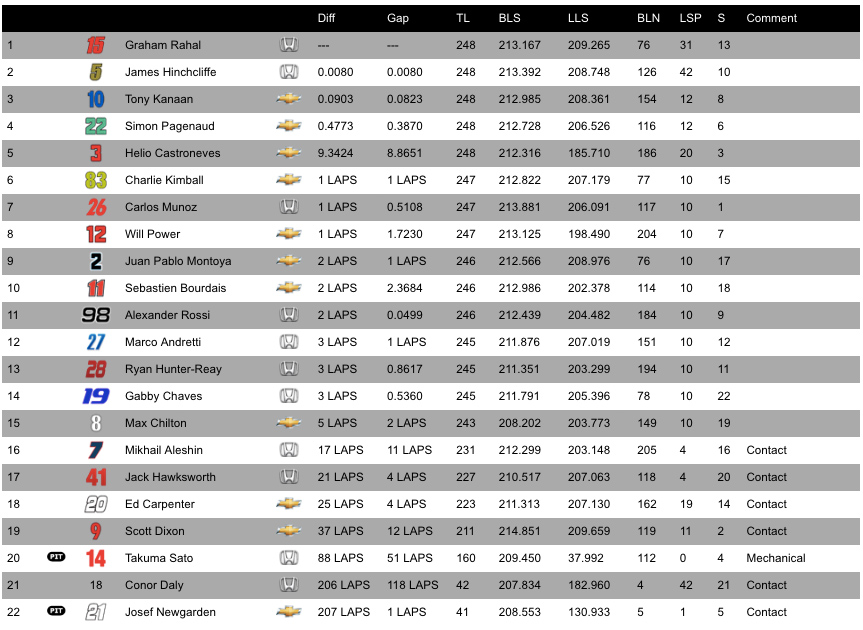 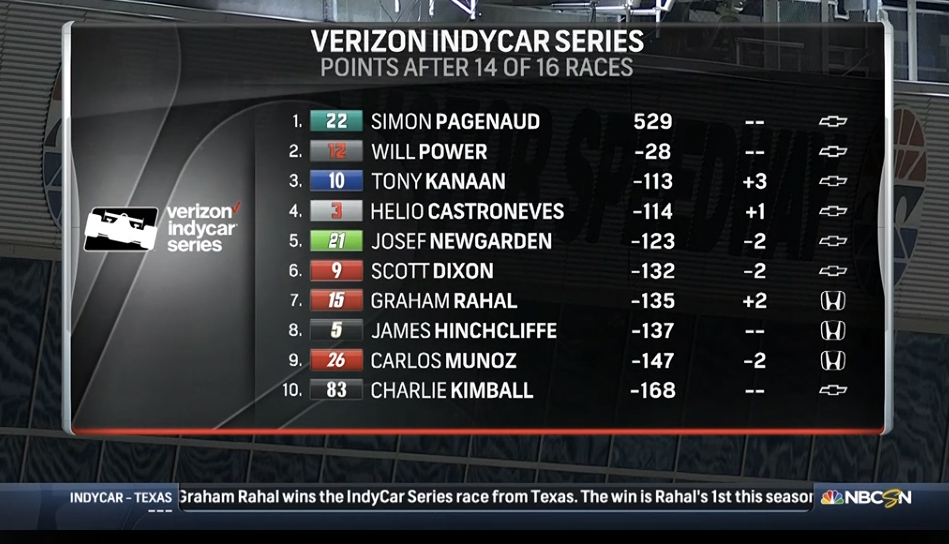