WATKINS GLEN, N.Y. – As expected, times have plunged in the opening practice session for the Verizon IndyCar Series’ return to Watkins Glen International.

Scott Dixon took the No. 9 Target Chip Ganassi Racing Chevrolet to a 1:24.1281 lap time around the 3.37-mile road course in the opening practice, which was scheduled for 45 minutes initially but extended an extra 10 minutes owing to a red flag for an incident involving Conor Daly.

“A little bit cooler than when we tested, but the Target car rolled off quick,” Dixon told NBCSN’s Jon Beekhuis.

The official track record is 1:28.1322 by Ryan Briscoe in 2009. But owing to the repave of the track and the new aero kit components, times are four-plus seconds clear. And that’s only on Firestone’s black primary tires, not the red softer alternates.

Daly’s incident occurred when he lost control off the downhill left-handed Turn 6, apparently hitting water in the curbing from overnight rain and then spinning to the other side of the course. He was OK and spoke to Beekhuis afterwards, but his No. 18 Jonathan Byrd’s Hospitality Honda was not.

Beyond Dixon up front, Sebastien Bourdais was second in the No. 11 Team Hydroxycut KVSH Racing Chevrolet, with Will Power, Tony Kanaan and Graham Rahal completing the top five.

Of note, Spencer Pigot was 16th and RC Enerson was 17th, both back in their cars for the first time since Mid-Ohio. Pigot takes over the newly reliveried No. 20 Samsung Chevrolet for Ed Carpenter Racing while Enerson is in the No. 19 Boy Scouts of America Honda for Dale Coyne Racing. 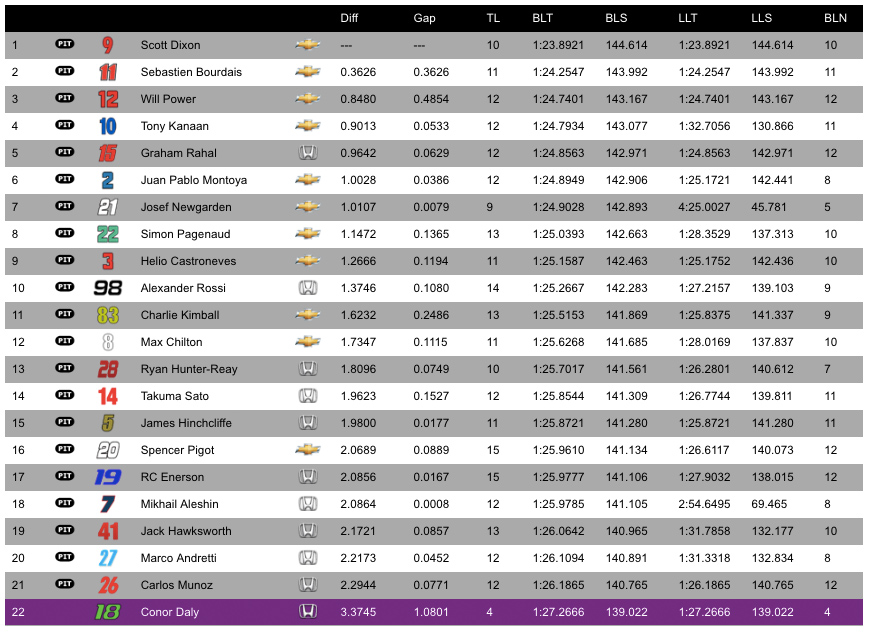