WATKINS GLEN, N.Y. – Scott Dixon led nearly all of the two-hour second Verizon IndyCar Series practice of the weekend at Watkins Glen International, until the final 10 minutes, when Will Power supplanted him.

But Dixon provided the final act to end on top for the last track action of the day for the IndyCar Grand Prix at The Glen.

Helio Castroneves popped up to second at the end of the session in the No. 3 Hitachi Team Penske Chevrolet at 1:23.0327 (146.111 mph). Power was third, with Tony Kanaan and Juan Pablo Montoya completing an all-Chevrolet top-five. Jack Hawksworth was best Honda in the No. 41 ABC Supply Co. Honda in sixth.

Separate incidents for Simon Pagenaud at Turn 7 and Kanaan at Turn 6 occurred at the end of the session.

Pagenaud appeared to overcorrect at the uphill, right-hand Turn 7 – a.k.a. the “Toe of the Boot” – and hit the barriers in his No. 22 Hewlett Packard Enterprise Chevrolet for Team Penske. There appeared to be a bit of damage to the left side of the car.

Kanaan, meanwhile, had a lazy spin in the No. 10 NTT Data Chip Ganassi Racing Chevrolet exiting Turn 6. His car was unharmed.

Times are below. Third practice follows Saturday morning from 11 to 11:45 a.m. 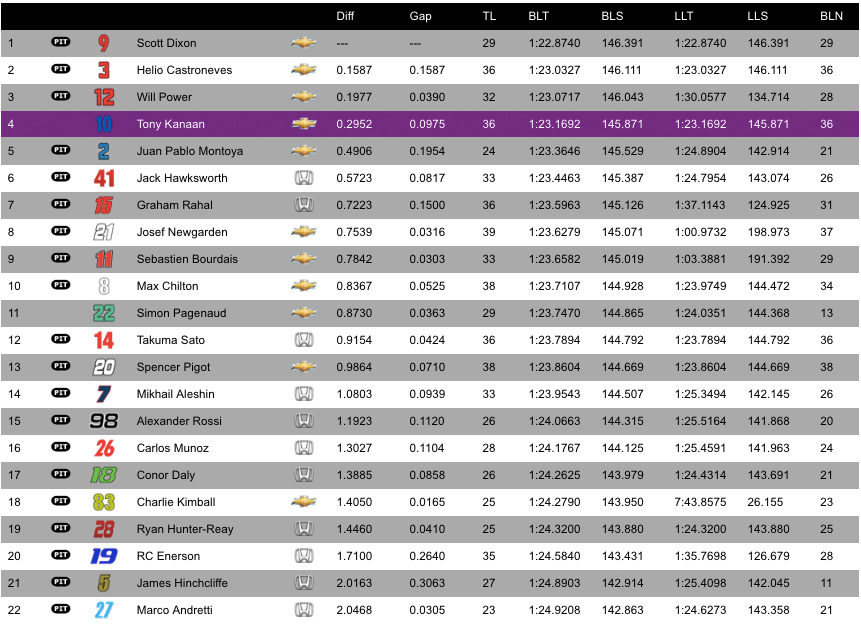