WATKINS GLEN, N.Y. – A heavy accident for Josef Newgarden in Turn 7 was the lead story during the third and final practice before qualifying in the Verizon IndyCar Series’ INDYCAR Grand Prix at The Glen presented by Hitachi.

Newgarden lost control of his car in Turn 7, and the No. 21 Fuzzy’s Vodka Chevrolet hit hard into the tire barriers. But the car looked better than it appeared from the replay upon its return to the paddock, and Newgarden, who was OK, felt worse about the extra work forced on his Ed Carpenter Racing team.

“The car is relatively OK I think. It wasn’t as bad as it could be. There will be some work. You always feel bad when you put work on the team that’s unnecessary.”

Up front, meanwhile, Dixon led his third consecutive practice session with an even quicker lap than he did in either session on Friday.

Takuma Sato also brought out a red flag for a stop on course, but stopped the car before any contact at Turn 9.

Times are below; qualifying is set to start from 3 p.m. ET and local time. It airs tonight at 6 p.m. ET on NBCSN and the NBC Sports App. 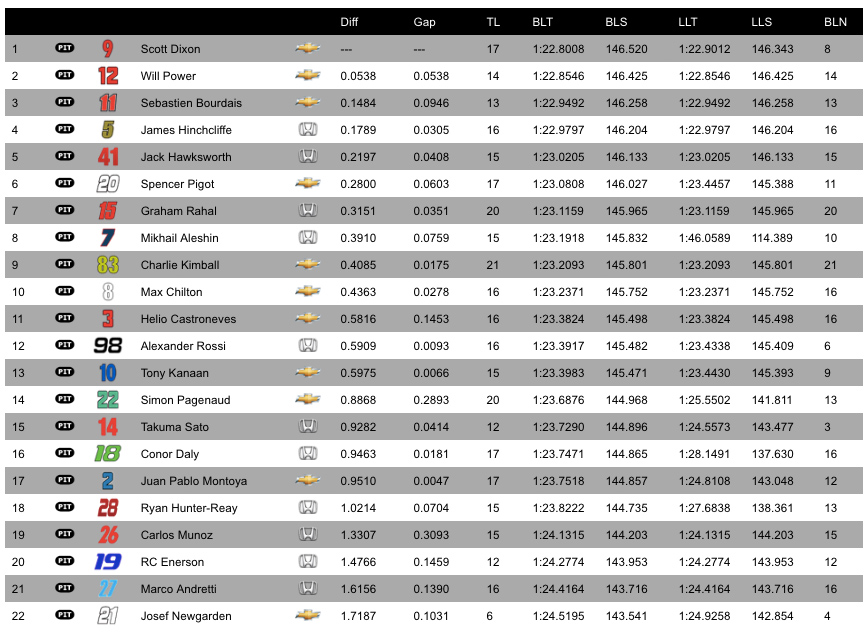