It was Schumacher’s second Traxxas Shootout win in the event’s five-year history, and his second in the last three years (also won in 2014). It also marked the fourth time that a DSR driver has won the Shootout.

Now Schumacher turns his attention towards winning the U.S. Nationals for the 10th time in his career. The finals are Monday. Schumacher last won the NHRA’s biggest race of the season in 2012.

“We went to a party Thursday night and I said, ‘Man, I’m not being cocky, but I feel like we’re running this race. The car just got too good at the right time, coming to a race that we’re always good at anyways.’

“It’s easy to say that, but it’s hard to come out and do it. We’ve got the first leg done. Now we go out tomorrow and work on a warm-track tuneup because Monday it’s going to be hot out and, it’s funny, but we’re a way better team when it’s hot out.” 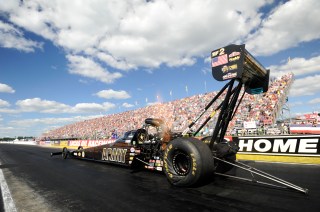 Schumacher defeated Brittany Force in the first round and fellow DSR teammate Antron Brown in the second round before his matchup with Pritchett.

Pritchett, appearing in her first Shootout and sporting sponsorship from Papa John’s Pizza, was a close second at 3.738 (at 317.05 mph). She defeated Doug Kalitta and another DSR teammate, Shawn Langdon, to reach the final round vs. Schumacher and his U.S. Army-sponsored dragster. Pritchett earned $15,000 for her runner-up finish. 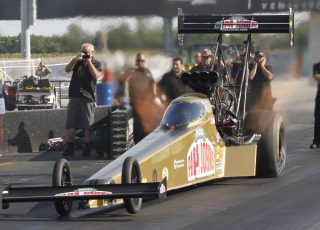 Sunday will mark the Traxxas Shootout for Funny Cars, again with $100,000 going to the winner.