He paced all three practice sessions, and then followed it up in qualifying with a new track record in the No. 9 Target Chip Ganassi Racing Chevrolet to score his second pole position of the season.

Dixon’s pace at the front of the field was about the only thing normal during a penalty-ridden qualifying session, where five drivers were penalized for various infractions.

Both Schmidt Peterson Motorsports teammates, James Hinchcliffe and Mikhail Aleshin, incurred penalties for qualifying interference – Hinchcliffe on Will Power in Q1 and Aleshin on Juan Pablo Montoya in Q2 – and it knocked both of them out of advancing into the next session.

Aleshin’s penalty, interestingly, promoted Power into the Firestone Fast Six. It was a surprise that both he and his Verizon IndyCar Series championship sparring partner Simon Pagenaud were both knocked out in Q2, and looked set to start seventh and eighth, respectively. This marks the first time Pagenaud has missed the Fast Six all season.

Others penalized were Graham Rahal, Takuma Sato and Conor Daly. Rahal’s was for interfering with Jack Hawksworth, which actually promoted Hawksworth into the next session, Q2. Sato, meanwhile, spun at Turn 7 – the weekend trouble spot thus far – and lost his two fastest laps. Additionally, Daly received a drive-through penalty for a violation of the pit exit blend line that cost him track time and a possible chance at making it to the second round.

Overall, experience won out within the Firestone Fast Six, though. Dixon beat Power, with Sebastien Bourdais an impressive third for KVSH Racing, Helio Castroneves and Tony Kanaan completing the rest of the top five.

Max Chilton was sixth, in his first Firestone Fast Six, for his best start yet this year on a road or street course. His previous best was seventh at Road America; his best overall start this year is fourth at Iowa.

Castroneves and Kanaan ran the Fast Six on Firestone’s red alternates but the other four ran on blacks.

Other nuggets of note… Hawksworth ended top Honda in ninth and will start there for the third time this year, Aleshin fell to 10th, RC Enerson was 11th and into Q2 for his best start yet in his second IndyCar start, and Josef Newgarden was 12th in a repaired car.

Marco Andretti was 18th, and his start is his first outside the bottom four on a road or street course since being 14th at St. Petersburg. 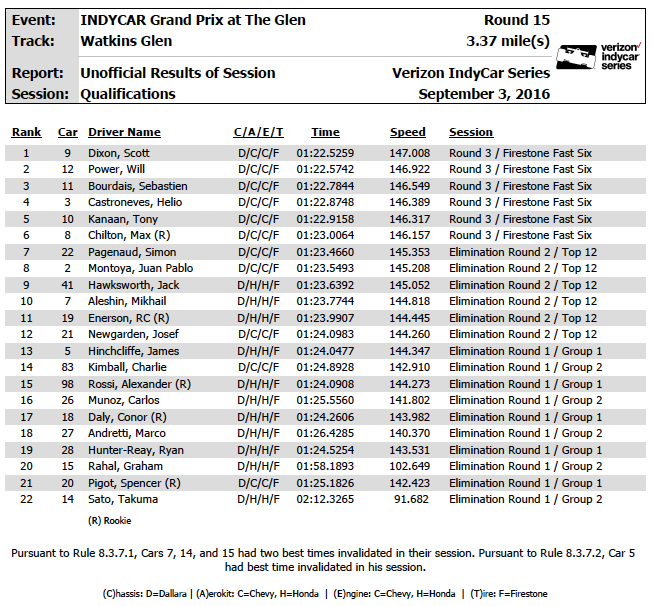