WATKINS GLEN, N.Y. – Scott Dixon made it home on fumes to complete a perfect weekend at Watkins Glen International, where he led every session and won his second Verizon IndyCar Series race of the season.

Dixon made it home as others faced a late splash-and-dash or risked stopping late on in a chaotic race, the second to last of 2016.

But while the finish was dramatic, much of Dixon’s weekend wasn’t – it was controlled from start to finish in the No. 9 Target Chip Ganassi Racing Chevrolet.

In the race itself, Dixon led 50 of 60 laps, and also got a bit lucky in terms of timing on the yellows that hit – something that has caught him out in the past, most notably at Toronto.

Dixon pitted for the first time on Lap 14 and a lap later, the first yellow came out following a tire blow-out for Mikhail Aleshin at the top of the Esses at Turn 4.

Others such as championship sparring partners Will Power and Simon Pagenaud had not pitted, nor had Dixon’s teammate Tony Kanaan. So that meant Dixon and teammate Max Chilton would cycle through to the front while those who’d need to pit under yellow would cycle back.

Dixon headed the field for the first 13 laps, then led the majority of the middle stanza from Laps 16 to 36, barring the next round of stops.

The second was a three-wide battle between Sebastien Bourdais, Conor Daly and Alexander Rossi going into the Inner Loop on Lap 36. Bourdais squeezed through the middle and caught air over the curbs, but landed and managed to avoid a potentially nasty accident.

The race took a turn towards its nail-biting finish following a dramatic moment in the championship chase. The fourth member of the Ganassi quartet beyond Dixon, Chilton and Kanaan, Charlie Kimball, got a huge run on Will Power going into the Esses on Lap 39. But Power apparently didn’t see him and moved up the road into him on corner exit.

Power crashed out of the race and that meant the day would be better for title sparring partner Pagenaud. Power was checked and released from the infield medical center, but has not been cleared to drive owing to concussion-like symptoms. Per INDYCAR, further evaluations are expected this week.

Alas, the yellow and the subsequent final round of stops meant that with fuel stints usually in the 17 to 18-lap range, there would then be a longer run to the finish of 19 laps.

It meant a handful of different strategies were in play as drivers needed to save to make it home.

Helio Castroneves had stopped on Lap 36 and in theory, needed less fuel once he stopped with the leaders five laps later on Lap 41. But he pitted for a splash on Lap 57 along with Kimball and Chilton.

James Hinchcliffe was promoted into second and trailed Dixon by 18.1507 seconds. But he didn’t make it home, running out on Turn 8 on the final lap. It dropped him from a near-certain second-place into 18th.

Dixon did make it home, finishing 16.5 seconds clear of Josef Newgarden, who’d had a less eventful race than the rest of the field. Castroneves was third ahead of Daly, whose team was surprised as he was that he made it home. Bourdais was less than thrilled with Daly after the race, but still managed to come home in fifth.

Kimball ended his eventful race in sixth ahead of Pagenaud, the points leader, in seventh with Alexander Rossi, RC Enerson and Max Chilton making it three more rookies – along with Daly – in the top 10. Enerson had been caught out on the first yellow when running seventh, but recovered nicely in his second IndyCar start.

Juan Pablo Montoya and Takuma Sato had late spins that dropped them to 13th and 17th, respectively. Despite wholesale changes in the morning warmup, Ryan Hunter-Reay could only end 14th in his 200th IndyCar start. Hinchcliffe, as noted, was 18th while apparent right rear suspension issues – and the tire not being solid – helped knock Kanaan to 19th, the second-worst finish of his season.

Power’s accident left him 20th ahead of Rahal and Aleshin, who were also out of the race.

Unofficially heading to the final race of the season, Pagenaud leads Power by 43 points. 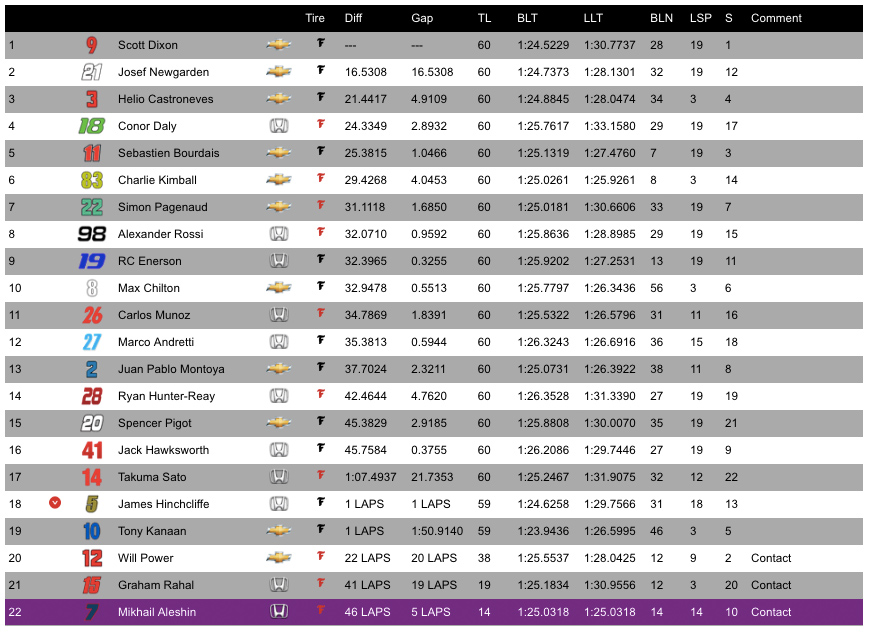