WATKINS GLEN, N.Y. – The stage is set for the Verizon IndyCar Series’ championship finale in two weeks at Sonoma Raceway, and it will be a battle between Team Penske teammates Simon Pagenaud and Will Power in the GoPro Grand Prix of Sonoma.

In Sunday’s INDYCAR Grand Prix at The Glen presented by Hitachi, Pagenaud finished seventh, while Power crashed out. It means Pagenaud’s lead grew from 28 to 43 points in one race.

All others will be mathematically eliminated once the green flag flies at Sonoma on Sept. 18, and either Pagenaud will win his first series title or Power will win his second.

The last four races have provided four key plot twists as it’s shaped up as a two-way title fight. Here’s the quick synopsis:

And then there was today. Pagenaud started and finished seventh, but in-between shot up to third on the first corner of the first lap. He then got caught out on a yellow, losing spots, but recovered as the race went on.

Power, by contrast, saw his title hopes take a hit when Charlie Kimball got a run on him coming up the Esses. Contact between the two – it did not appear as though Power saw him coming – occurred when Power clipped Kimball’s right front wing and then shot across into the outside retaining wall.

Power was checked and released from the infield care center, but per INDYCAR, has not been cleared to drive owing to concussion-like symptoms.

For Pagenaud, he acknowledged he had nothing for Scott Dixon, who dominated the weekend from start to finish.

“I had nothing for Scott this weekend,” he said post-race. “In my opinion, we were fighting for podium results. We ended up where we ended up. It was more strategy than skills.”

But Pagenaud also reflected on how he drove from a championship perspective, thinking bigger picture perhaps more than the outright huge result at play.

There will undoubtedly be more to follow from him, but he was in a good state of mind leaving the Glen. 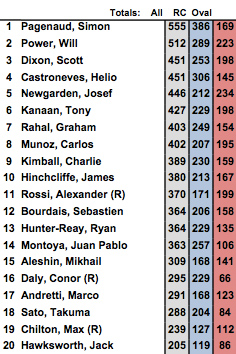