BROWNSBURG, Indiana – At speeds of over 320 mph, Leah Pritchett may very well drive the fastest pizza delivery car there is.

The NHRA Top Fuel driver is being sponsored – the second of a two-race deal – during this weekend’s Chevrolet Performance U.S. Nationals by Papa John’s Pizza.

It’s been a pretty eventful weekend so far for Pritchett on three fronts:

Schnatter drove a mint condition and classic 1971 Chevrolet Camaro Z-28, while Pritchett drove her own classic, a 1969 Chevy Camaro Z-28. 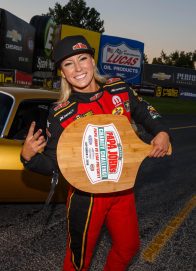 While Pritchett crossed the finish line first, the real winner was Riley Children’s Hospital in Indianapolis, which received $20,000 from the grudge match: Schnatter put up $10,000, while Pritchett’s boss, Don Schumacher, put up the other $10,000.

“I wanted her to win, but I wanted a close race,” Schnatter said. “She’s just too good. I said, ‘Leah, the kids are going to win. That’s all that matters.’”

Added Pritchett, “To run against (Papa John) was exhilarating. I think it’s really awesome to have John be so integrated and for me somewhat of a mentor.

“He made Papa John’s out of absolutely nothing, from a dream. And this is a dream he is helping me get to live.”