But as the NHRA begins its six-race playoff, the Countdown to the Championship, this weekend at zMAX Dragway in suburban Charlotte, Brown may want to consider changing his nickname.

As in “ABC3” – otherwise known as Antron Brown Championship No. 3.

Brown enters this weekend’s NHRA Carolina Nationals prepared to repeat as Top Fuel season champion, and to earn his third career championship behind the wheel of a dragster in the last five seasons.

“I feel confident we can compete at the level that it takes to be there at the last race to have a chance to win this championship,” Brown said in an NHRA teleconference. “I’m very confident in that.”

After last year’s outstanding season – seven wins and the championship – there’s no question the New Jersey native (who now lives near Indianapolis) has kept things going and moving forward.

Throughout much of the first 18 races of 2016, the driver of the Matco Tools dragster has been ranked either No. 1 or No. 2 in the Top Fuel standings.

He’s also won four races – Las Vegas, Epping, Chicago and Seattle – and leads the series in final round appearances with 8 in 18 races.

It’s almost the same position where he was in at this time last year when the 2015 Countdown was set to kick off.

And we all knew how that wound up – with the championship trophy on his mantle to join the trophy he earned in 2012.

In fact, Brown has been the winningest driver in Top Fuel in the last half-decade. Since 2011, his 33 wins are more than twice the next winningest Top Fuel driver and more than double the number of wins of the next two highest combined.

Not only has he led the series in wins in three of the last four years, he’s also leading in wins this season as well.

One more thing to consider: Brown has finished in the top two in the points three times in the last four seasons – not including this season.

If Brown continues what he’s done this season, as well as what he did last season, it’s going to be hard for his nine other Countdown contenders to keep him from winning yet another title.

“It’s what we’ve been shooting for,” Brown said of the championship. “It’s what you work so hard for in the regular season. 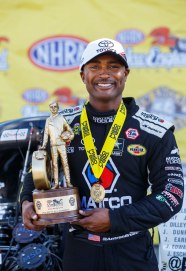 “Now that time is over with. We did a great job in the regular season and now we have our work cut out for us in the last six races of the year.

“Now we have to go out and do that same thing, but in just six races. We’re going to go out there and push hard and see what we can do.”

Now in its 10th year, the Countdown has historically been rough on competitors, particularly in the first round of eliminations. Several potential championships have gone by the wayside when favored drivers were eliminated early in one or more of the six playoff races.

Fortunately for Brown, he’s had just one first round exit thus far this season, a streak he hopes to continue in this year’s playoffs.

“The thing about it is every point is crucial,” Brown said. “I look at the Countdown each and every year as not just six races. There’s 24 rounds up for grabs. Each round is worth 20 points (plus a maximum of 12 points each race for qualifying). That’s your maximum points. How many of those rounds can you get?

“That’s what we focus on, just doing one round at a time and getting as many rounds as possible. Last year we did a great job at it. But this year is going to be a whole other ball of wax where the competition has stepped up again to just an incredible level to go out there and try to make that happen like we did last year.”

Brown is as confident heading into this year’s Countdown as he was going into last year’s playoff. Obviously, he’s hoping the end result winds up the same.

“All these spots are so close and tight, man, it’s going to be a crapshoot going here for these six races for the championship,” Brown said. “Those are the challenges we all live for.

“We live for these moments to go out there as a team, as a whole, to see who can be that champion at the end of the year. That’s what we’ve been working for. … (We’re) just hoping all of our hard work pays off right now.”

ANTRON BROWN BY THE NUMBERS