SONOMA, Calif. – Helio Castroneves topped his second straight 75-minute practice session in the No. 3 Hitachi Team Penske Chevrolet, with an even faster time of 1:16.6678 compared to this morning.

The second session for Sunday’s GoPro Grand Prix of Sonoma (6:30 p.m. ET, NBCSN) ran in hotter conditions than this morning. Compared to temperatures of 62 degrees ambient and 87 on track, per Firestone, it was 79 and 113 in the second session.

Title rivals Will Power and Simon Pagenaud made it a Team Penske 1-2-3 in the session, both drivers excelling in the warmer afternoon session compared to this morning. They had saved tires in the morning and figured it would be closer to qualifying now, and they were better as expected, both also in the 1:16 bracket.

Ryan Hunter-Reay and Alexander Rossi made it two Andretti Autosport Hondas completing the top five, although Rossi stopped on course with an apparent misfire to end the session a couple minutes early.

Rossi’s course stoppage wasn’t much, while by contrast, fellow Sunoco Rookie of the Year contender Conor Daly had a massive smoke show with about 20 minutes left in the session.

The young American lost power in his No. 18 Jonathan Byrd’s Hospitality Honda exiting the Carousel and stopped before Turn 7 with a huge plume of smoke out the back of his car.

Times are below from the session. 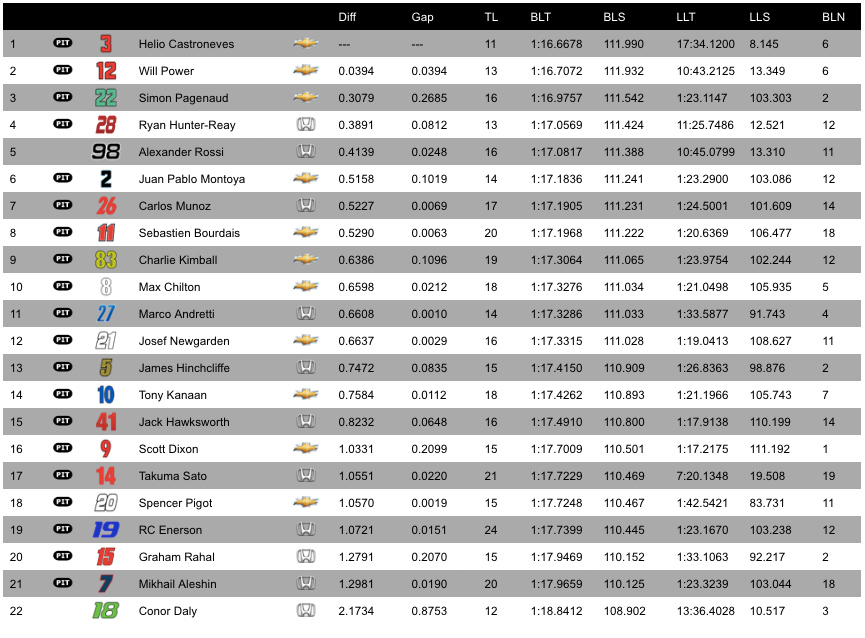