The driver of the No. 3 Hitachi Team Penske Chevrolet posted a best time of 1:17.3298 around the 2.385-mile Sonoma Raceway road course, as the Brazilian remains in search of his first win since Detroit in 2014.

Castroneves also enters the weekend tied with Scott Dixon for third place in the points standings, although neither has a shot at securing the championship. Simon Pagenaud has a 104-point lead over both of them.

Pagenaud was only 10th, and Team Penske title rival Will Power in 17th, in the opening session.

Hondas had a better session with second through sixth in the session with Marco Andretti having easily his best session of the year in second in the No. 27 Snapple Honda, at 1:17.4611.

Graham Rahal was third, Jack Hawksworth fourth and Ryan Hunter-Reay fifth, with Hunter-Reay doing the best he can under adverse circumstances this week.

While Hunter-Reay and wife Beccy had their third boy earlier in the week, with the bundle of joy that brought to the family, Beccy and brother Robby Gordon lost their father Bob on Thursday and are dealing with that.

Mikhail Aleshin, who is fighting a cold this weekend, made it five Hondas in the top six in sixth. A late spin at the end of the session brought no damage; just a light up of his tires.

Times are below. The 75-minute session ran without a red flag. 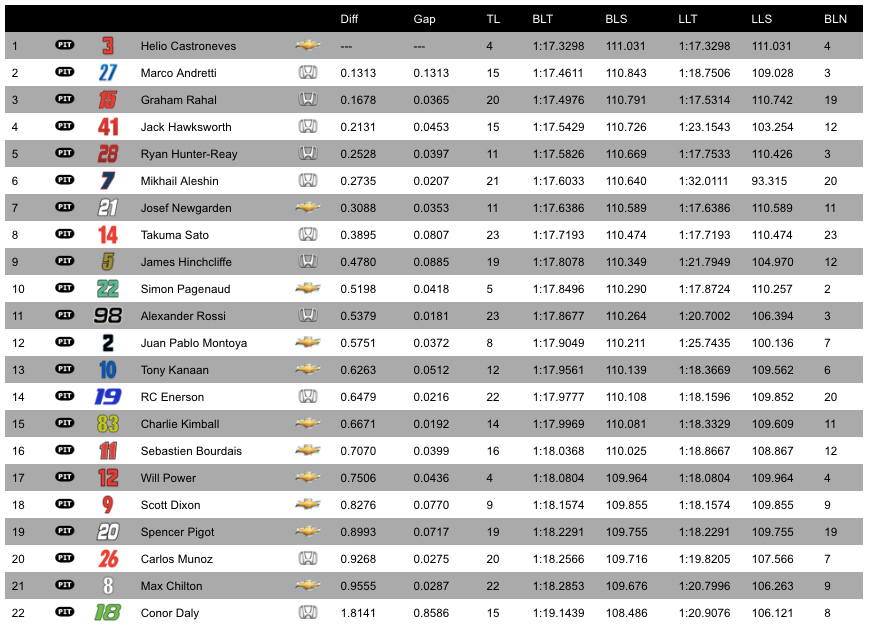