On Friday at Sonoma Raceway, it was time for Burgess – the Australian – to enter the racing world for her first ever lap in a two-seater IndyCar, with the “Mayor of Hinchtown” behind the wheel.

A specially arranged two-seater ride was set up where Hinchcliffe would be behind the wheel of the ARROW two-seater IndyCar, a car usually driven by others such as Davey Hamilton, Zach Veach and Gabby Chaves, with Burgess as his passenger in the backseat.

Dancing is a physical task and it’s something Hinchcliffe’s had to learn through thorough preparation.

For Burgess, however, with no time to prepare other than getting suited and booted – her high heels took a tradeoff to driving shoes for the moment of the ride – it was a surreal experience.

“My legs felt like jelly! I felt like everything else was in slow motion after going that fast. It was an indescribable feeling,” Burgess told NBC Sports right after the ride happened.

Burgess, who called the ride “better than a roller coaster,” described the physicality after just two laps.

“It’s hard for me to even understand,” she said. “My job is physical, and I know how to push it.

“But what James and IndyCar drivers do is a whole other level. Turning a car with no power steering, and with that exact precision for three hours, is unbelievable. It far exceeds the athleticism that I need as a dancer.

“I completely terrified myself! I just didn’t know what to expect. Going 165 mph is a lot faster than I ever have gone or will do. I knew I was in safe hands with James. But you can’t expect what it will feel like. This is amazing.”

Hinchcliffe, for his part, weighed in during a press conference on Saturday morning.

“I think she enjoyed it. The interesting thing for mere is educating people about IndyCar racing, what it takes to do what we do. Sharna has had quite an education over the last couple weeks, learning how athletic drivers have to be, how focused they have to be, the concentration level required to compete at this level,” he said.

“She kind of saw from the periphery of Texas, but didn’t really see anything on track, we didn’t really know each other. Now having learned all these things from me, getting to come here, see some of it on the track, experience the car herself, again opens her eyes to the next level of what it really takes to do this.”

Here’s more from the ride-along itself on Friday.

Looks like @SharnaBurgess enjoyed her 2-seater #IndyCar drive around @RaceSonoma with @Hinchtown at the wheel. #DWTS pic.twitter.com/XCFIyzFrwO

Hinchcliffe, for his part, said his dancing the first week went better than expected as he looks ahead to this week’s show.

“It was very nerve wracking. But I have an incredible partner in Sharna Burgess. She kept me calm. We were joking literally right up until the count came down. We almost missed the start of the song because we were cracking jokes on the dance floor. I didn’t see the video package leading into it. I don’t remember what we were joking about. We were joking about something.”

His logistical challenges trying to get from place to place in the last couple weeks have been helped and aided by his personal PR rep, Fiona Hewitson.

“I think there is a lot of time in an IndyCar driver’s career we’re pulled in a million different directions,” he said. “We have to be able to flip the switch, focus on one thing, flip the switch off, focus on something else, travel, whatever. It kind of goes with the lifestyle. In a lot of ways doing this for a living prepared me for taking on this extra responsibility and extra task.

“The scheduling and logistics have been a bit of a nightmare over the last couple of weeks. Fiona deserves a ton of credit for getting me all through it.”

Overall, INDYCAR has released a series of political posters for voting for Hinchcliffe, designed as much to promote the “Team Stop and Go” and also to spoof/troll the actual candidates running for office in the 2016 presidential election. 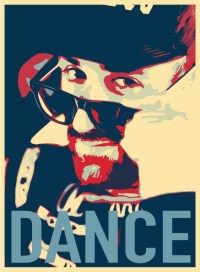 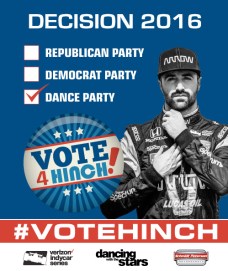 The “Mayor” also called in some support before he started dancing last week from his roommate/good friend and fellow Verizon IndyCar Series driver Conor Daly, who starred in the following video shot at Watkins Glen.

Hinchcliffe’s first dance is linked below, along with some support from the INDYCAR community.