SONOMA, Calif. – Simon Pagenaud’s championship season in the Verizon IndyCar Series headlined a 1-2-3 finish for Team Penske in this, its 50th season of competition, as he led home Will Power and Helio Castroneves.

Pagenaud’s title is his first, matching Power’s total, while Castroneves continued his career of being “the bridesmaid, not the bride” with yet another top-five finish in the championship, his 13th in 17 seasons with Team Penske, and fifth in a row.

Fuller details on the points tables will follow later on.

Chevrolet, meanwhile, has won its fifth straight Manufacturer’s Championship since its return to the series in 2012, with a points total of 1814-1710 over Honda. Chevrolet won all bar two races this season (Alexander Rossi at the Indianapolis 500 and Graham Rahal at Texas).

Rossi, meanwhile, officially clinched Sunoco Rookie of the Year honors over Conor Daly and Max Chilton. Daly had a mathematical chance but a DNF ended those hopes today.

Unofficial points standings (Top 20 of 35) are below: 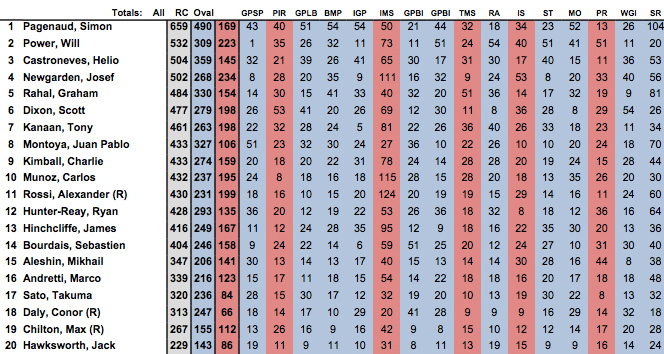