The Sunday races for Pirelli World Challenge at Sonoma Raceway were a little less eventful than Saturday’s, but they did feature the same winners.

Udell, meanwhile, made it a dynamic weekend by also clinching the GT Cup title for GMG Racing, which was one of two wrapped this weekend. Martin Fuentes secured the GTA title for Scuderia Corsa, continuing with the banner year for Giacomo Mattioli’s team.

O’Connell’s win up front came courtesy of a dynamic start, although he was able to get away cleanly following contact behind him when a pair of McLarens collided unintentionally. Jon Fogarty reported a loss of air in the right rear of his No. 99 GAINSCO/Bob Stallings Racing McLaren 650S GT3, which backed him into points leader Alvaro Parente, in the No. 9 K-PAX Racing McLaren 650S GT3.

In the ensuing chaos, O’Connell’s teammate Michael Cooper got caught up in it through no fault of his own, and faded to 21st.

@stephenVking @WCRacing @tonydizinno I had lost air in the RR & had 2 slow, stacked those guys up and that is the resulting contact.

Up front, O’Connell controlled the rest of the day in the No. 3 Cadillac Racing Cadillac ATS-V.R for his third win of the year and second of the weekend.

Austin Cindric finished third for his second podium of the weekend in the No. 6 K-PAX Racing McLaren 650S GT3, albeit still disappointed to have lost the Saturday win.

O’Connell grabbed a win at a track that while he has a wealth of experience at, he’s struggled in recent years.

“I was laser focused on the starter with the green flag,” O’Connell said. “I had the revs up on the Cadillac ATS-V.R Coupe and was able to drive by the McLarens. I guess there was a lot of action behind me in the carousel and when I exited the last turn on the first lap I had pretty nice gap. Then when I came around on lap two I saw parts and pieces in the track from the lap one action. It was a good weekend for Cadillac. I tell people this team is like Joe Montana. He was always a fourth quarter player and we are headed to Laguna Seca with still a chance.”

That “chance” is a mathematically possible one – O’Connell and Cooper both have 1451 points, 103 back of Parente. A race win maximum is 110 points and seven bonus points are possible for pole. But such a situation would only present itself if Parente and Long failed to reach 50 percent race distance and failed to score points. There’s only one race left at Mazda Raceway Laguna Seca on Oct. 9, so that’s all the marbles.

Of note, Michael Lewis banked his fifth top-10 in the last six races in the No. 98 Calvert Dynamics Porsche, Jonathan Summerton finished an impressive eighth overall in his first weekend in the older, venerable No. 66 DIME Mercedes-Benz SLS AMG GT3 and Acura NSX GT3 driver Peter Kox ended a solid 10th in the No. 34 RealTime Racing Acura TLX-GT. 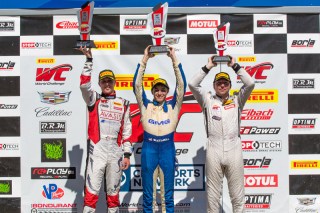 The Fuentes and Udell titles come after they’ve paced both their classes this year. Udell has 12 wins this year, Fuentes 9.

“We knew we had a real shot at the championship this year, but to walk away with 12 wins and still one race remaining is beyond what we could have hoped for,” Udell said.

“Last year we had such a heartbreaking incident that took us out of the championship that this year has more than made up for it. I couldn’t be happier and look forward to closing everything out in Monterey.” 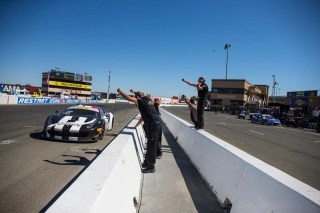 Fuentes added of his title year, “This is not a single man championship. The whole year, Scuderia Corsa gave us a great car and I’m thankful for everyone on our team – this is a full team championship, and it wouldn’t be possible if I didn’t have the best team on my side. Thank you to everyone who supports us all season – the team, sponsors, and fans. We are looking forward to a great season in 2017, and to these last two races of the season.”

The GTS race was more interesting. Sandberg led from the front in his No. 13 ANSA Motorsports KTM X-BOW GT4 but Anthony Mantella drove well in his own No. 8 KTM to get into second, edging ahead of Saturday winner Nate Stacy, who held on for all he could in the No. 14 Roush Performance Ford Mustang Boss 302 ahead of the lighter, more nimble car.

Lawson Aschenbach, who finished sixth in the No. 10 Blackdog Speed Shop Chevrolet Camaro Z/28.R, has a shot at the title at Mazda Raceway Laguna Seca with two races on tap there rather than one, owing to the fact Mid-Ohio’s first race was canceled and shifted.

All classes for Pirelli World Challenge resume and finish their season at Mazda Raceway Laguna Seca the weekend of Oct. 7-9.