Formula E confirmed in July that New York would be one of five new cities joining the calendar for the forthcoming season, along with Montreal, Marrakech, Brussels and Hong Kong, the latter hosting the season-opener on October 9.

At a launch event in New York on Wednesday, details regarding Formula E’s visit to Brooklyn, including the track layout, were unveiled.

See the release below for full details:

Lower Manhattan and the Statue of Liberty will form a dramatic backdrop to the inaugural New York City ePrix, which the FIA Formula E Championship, the world’s first fully-electric racing series, today confirmed will take place in Red Hook, Brooklyn.

The 1.947km (1.21mile) track was revealed in front of a gathering of assorted media, city and state authorities, local dignitaries, Deputy Mayor for Economic Development Alicia Glen, ABT Schaeffler Audi Sport driver Lucas di Grassi, and FIA President Jean Todt at a press conference on the shores of New York Harbour at the Brooklyn Cruise Terminal. 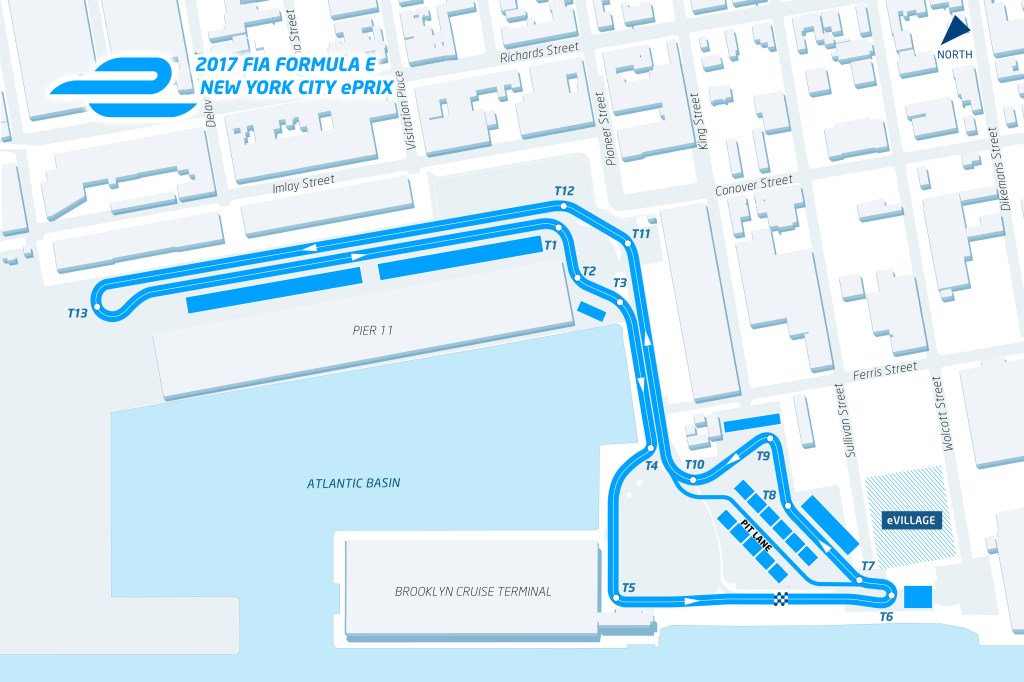 The New York City ePrix double-header in mid-July will be the first FIA-sanctioned open-wheel race to take place within the five boroughs of New York City. The circuit, which remains subject to FIA track homologation, features 13 turns and will wind its way around Pier 11 and the Brooklyn Cruise Terminal.

Speaking at today’s press conference in New York, Alejandro Agag, CEO of Formula E, said: “To race in New York City is ahistoric moment – not only for Formula E, but for motorsport in general – and again highlights the philosophy of Formula E to bring fully-electric racing to the world’s greatest cities. When we originally started the project we could only dream of bringing Formula E to a place like New York, with arguably the most recognisable skyline of any city in the world. I’d like to thank everyone involved in helping bring Formula E to New York for many years to come.”

Jean Todt, President of the FIA, said: “Just being able to bring a motor race to the heart of a great city like New York is already an amazing achievement in itself. I am really pleased that this city is going to feature on the calendar of an FIA championship, especially Formula E, which provides the best possible combination of the two pillars that form the basis of the Federation, namely sport and mobility.

“Formula E brings motorsport to the heart of the most important and fascinating cities in the world -New York joins a list that includes, among others, Hong Kong, Buenos Aires, Paris, Marrakesh and Montreal, proving just how vibrant and attractive this series has become, even though it is about to embark on what is only its third season.”

Fred Dixon, NYC & Company’s President and CEO, said: “We are so pleased to welcome Formula E’s inaugural New York City ePrixto Brooklyn in 2017. This fully-electric racing series will not only showcase the best of what New York City has to offer, but will also reaffirm NYC’s position as one of the world’s best big event destinations.”

“Growing sustainable technology is core to New York City’s innovation economy and to Mayor de Blasio’s OneNYC plan,” said NYCEDC President Maria Torres-Springer. “This makes Formula E a perfect fit for New York, and we’re extremely excited to be welcoming this event – along with the economic investment it brings – to the Red Hook community.”‎

Sebastien Buemi, Renault e.DAMS driver and reigning Formula E champion, said: “New York is one of the world’s great cities. I think it will be an amazing event, particularly with that backdrop! I can’t wait to race there – I expect it’s going to be one of the most spectacular tracks we have been to so far. Formula E is always pushing the boundaries with where we go and, along with Hong Kong, Paris and Berlin, we can genuinely say we have the most exciting calendar ever seen in motorsport.”

Lucas di Grassi, ABT Schaeffler Audi Sport driver, said: “A race in New York is for me and my fellow drivers like a small dream. Congratulations to everyone at Formula E who has worked so hard for it, and have now let this dream be a reality. Just imagine seeing the Statue of Liberty and the Manhattan skyline from the pitlane! It will also be a sporting highlight as the track has a mix of fast sections, hairpin bends and a narrow infield directly on the waterfront.”