But took until the last weekend, for now, that Shank will run a prototype to deliver on the undoubted pace and promise of a major endurance race victory with the car. Missteps, dollar signs and heartbreak added up in 2015 and in 2016 the goal was to finally bank a win at Daytona, Sebring or Petit Le Mans to go along with an overdue debut at Le Mans in June.

The team finally did so in authoritative fashion at this weekend’s Petit Le Mans, to cap off the IMSA WeatherTech SportsCar Championship season.

Shank’s longtime co-driver pairing of Ozz Negri and John Pew suited up together for the last time, as Pew is set to step back from full-time driving after a 10-year run driving either DPs or the P2 for Shank at the highest level of North American sports car racing.

In Olivier Pla, Shank has Onroak Automotive’s primary test and development driver of the Ligier JS P2, and one of sports car racing’s outright fastest drivers worldwide as the third driver.

The combination proved more potent than ever this weekend. Negri and Pla split the pre-qualifying practice sessions on top before Pla won the pole position, mirroring that first weekend at Daytona (Negri won pole there). 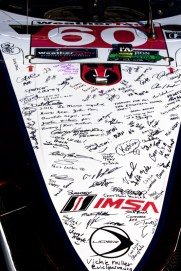 Pew only drove a limited amount of time in the race owing to slight back pain, but wasn’t forced to run more than that within the confines of the Prototype class, and that left Negri and Pla to run the majority of the race. The race began with fans having signed the front of the car to wish the team “good luck.”

Outside of a left rear issue with the drive pins, the No. 60 car otherwise ran flawlessly, and the pit crew kept the car in win contention with largely good stops over the course of 10 hours.

It still took one final restart from Pla to hold off sports car racing’s early season star at Daytona and Sebring, Pipo Derani in the similar No. 2 Tequila Patron ESM Ligier JS P2 Honda, to ensure the victory was there. Once Pla pulled out a couple seconds in the first lap back to green inside the final 10 minutes, the win was assured.

The cleanliness and near perfect weekend this year could not have come as a more miraculous turn of fortune – and luck – after a simply nightmarish 2015 Petit Le Mans.

Rain wreaked havoc on the field all weekend and Pew crashed heavily during Thursday night practice last year. Thanks to some help from nearby Elan Motorsports, the hub for Dr. Don Panoz’s racing activities in Braselton, the team’s lone chassis was repaired. But then Negri had a spin in warmup that caused suspension damage, and Pew crashed again in the race.

The disaster of 2015 was quickly forgotten and erased with the dream 2016 weekend, and as Negri reflected, it was the perfect way for this era of Shank’s prototype participation to end.

“Starting from last year, we’ve been through everything,” Negri told NBC Sports. “One very key thing is me and Oli (Pla) like the same exact thing. We’ve worked together quite a lot. We put together a great package for this track. My engineer and the whole group from HPD worked really hard to get the setup where we wanted.

“It’s funny – I just had a good feeling. We were talking on the way here. We have nothing to lose… so let’s freaking go for it!

“It’s been one of those days when everything falls into place. We had problems in the car, in the left rear at the pit stop. So my crew worked through it, and a way of making of it not so painful. It’s just brilliant.”

Pla described the nerves on the last restart, knowing that the weekend’s worth of outright pace could have been undone with one bad launch.

“We were looking for this one for a long time,” he told NBC Sports. “Every race I had with these guys was in a position to win. As Ozz was saying, I was very determined to come here. I knew everything was fine, but for some reason I started to have a small misfire in the car. So you get a bit scared about these things! But it was OK when we got back going.”

The win for Pew sees him add this win to the team’s famous Rolex 24 at Daytona win in 2012. And coupled with his and the team’s 24 Hours of Le Mans debut – they finished 14th overall and ninth in LMP2 in a 23-car class, and a 60-car field – it’s finally been a good year in endurance races for him and the team after that roller coaster 2015 campaign last year.

Negri and Pew, as a tandem pairing, sign off their run as Shank prepares for the two-car Acura NSX GT3 program that will come online next year. Shank has expressed a desire to return to prototype racing but isn’t sure when that will be.

The three of them together – if you’ve followed sports car racing the last decade or so – could be the racing version equivalent of when Zach Galifianakis’ character in “The Hangover” once famously described him and his two buddies as “the three best friends that anybody could have.”

“You know how much John Pew has done for me and my team,” Shank told NBC Sports. “He’s a big part of the reason why we are where we are today as a team.”

“It has been just fantastic,” Pew said. “I’m just so grateful and lucky I ran into Shank. Ozz was here, and my friend Mark Patterson was too at the time. Another driver had to leave, so he needed a replacement. They said, ‘Call John Pew,’ and I’ve been here ever since. It’s the same core of guys. They’re great guys.”

“It’s tough to say everything he means in just a few words. I will miss him at the track but I won’t elsewhere – because I’ll bug him everyday just like I do! Through those years, I gained not only a teammate, but I got one of my best friends.”