On the racetrack, Alexis DeJoria is fighting hard to earn her first NHRA Funny Car championship.

But off the track, DeJoria is just as passionate about fighting hard to raise awareness about breast cancer, which affects one-in-eight women, according to the American Cancer Society.

For the fourth consecutive year, Alexis DeJoria Racing and the team she races for, Kalitta Motorsports, along with corporate support from Toyota and Patrón Spirits Company, will offer free mammograms to female ticketholders 40 years of age and older attending upcoming NHRA races at Dallas (Oct. 13-16) and Las Vegas (Oct. 27-30). 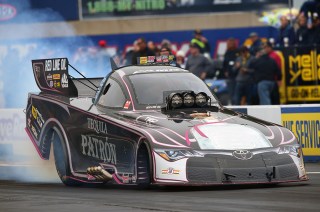 “Breast cancer awareness is a subject very dear to our hearts,” said DeJoria, driver of the Tequila Patrón Toyota Camry. “Early detection is key, and being proactive is the best way to fight this.”

Several hundred women have already taken advantage of the free screening in the first three years – with several fans that underwent the testing ultimately being diagnosed and able to be treated for breast cancer.

“The last three years with this program have been incredible,” DeJoria said. “Alexis DeJoria Racing is committed to providing free mammograms as long as we are out on the race track. The outpouring of support for this program is astounding.”

Mobile mammography units known as “Mammovans,” provided by Baylor Health (in Texas) and Nevada Health Care Systems (in Las Vegas), will be on-site at both Texas Motorplex (in suburban Ennis) and The Strip at Las Vegas Motor Speedway to provide screening for female fans.

In addition, several teams across all levels of NHRA drag racing are expected to add the color pink to their cars or uniforms in a show of support for victims of breast cancer.

DeJoria said one of the major reasons women don’t have regular mammograms is due to the cost, but the screening that will take place in Dallas and Las Vegas will be absolutely free, regardless of an individual’s health insurance status.

DeJoria plans to spend time during the race weekends at the Mammovan sites to welcome and offer “support and share hugs with women whose nerves may be getting the best of them,” the media release noted.

“Don’t be shy, ladies,” encourages DeJoria. “We’ll all be out there supporting each other. We have a great group of women that come out and operate the Mammovans.”

Mammograms will be offered on a first-come, first-served basis. No appointment is necessary and insurance or referrals are not needed.

So if your mother/sister/wife or daughter plan to attend either race, DeJoria encourages them to stop by to be screened.

“Each year, we work hard to put the word out about this program and the impact has grown every year,” DeJoria said. “The more people that find out about it, the better.”