Antron Brown has a new nickname.

Instead of being known as “AB” for his two initials, you can call him “Countdown Brown.”

It’s a moniker that is most appropriate. In the last 10 races in the NHRA Countdown to the Championship – six last season and four thus far in 2016 – Brown has won six of those events.

“That’s called teamwork, that’s called when the pressure gets up,” Brown said. “I think that’s what brings out the best in our team.

“Our team thrives on pressure. Where some teams might crack or fold, some teams get better. When the higher the pressure gets, it seems like it dials our knob up even more and we put that extra focus in. We all feel it.

“We can look at each other without even talking about it and know where we need to be. Every time we go down that racetrack, it’s like alright now, we have the next round. This is the coolest part that I think makes our team so good, we never look at the whole race. We take it one step at a time.

“Every step that we take we try to be efficient with it and make the best out of it. I think that’s what pays big dividends when we look back. We look at all the baby steps we made and all the right ones that got us where we needed to be.”

There’s another significant type of countdown for Brown in this weekend’s Toyota NHRA Nationals at The Strip at Las Vegas Motor Speedway.

Brown merely has to leave Las Vegas with between a 96 to 110-point lead to clinch his second consecutive Top Fuel championship and third in the last five seasons.

But don’t let that massive points lead coming into Sin City fool you. Like a savvy gambler, Brown is not letting the odds sway him. He’s most definitely keeping his cards close to the vest. 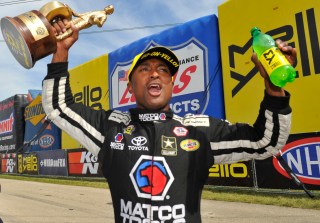 “We are going into Vegas, we have a little bit of a points lead but it’s anybody’s game,” Brown said. “Our main focus is to stay humble, keep our heads down and continue the hard work that’s got us here.

“That is a crucial moment for us right now. We’re still not done working. We can’t wait for Vegas and the Toyota Nationals.”

Brown is looking to extend his outstanding run thus far in this year’s Countdown at Las Vegas by claiming his fourth win in the first five races of the playoffs. That would make him 7-for-11 in his last 11 Countdown races, including last year’s three Countdown wins.

Given his large lead on Kalitta and the others chasing him, you’d think Brown would come into Vegas with a defensive mindset, to protect what he has so far.

If you indeed thought that, you thought right. As the artist formerly known as AB, it’s all about the offense and the win, baby.

“Our heads are really focused on the end and the end is not until they say this is the 2016 world championship winner,” Brown said. “We’re in a great situation right now, but we don’t feel comfortable yet and our work is not done yet.

“We’re not going in defensive mode and we’re just going to try to keep doing the same things we’ve done to get to this point.”

There’s a lot of wisdom in Brown’s strategy. Back in 2012, before he ultimately won his first Top Fuel crown, he also almost lost it.

Brown came into Las Vegas with a 136-point lead over Don Schumacher Racing teammate Tony Schumacher. But with uncharacteristic first-round losses in final eliminations at both Vegas and the season finale at Pomona, Brown barely held on to deny Schumacher his ninth career Top Fuel championship by a mere seven points, one of the closest finishes in NHRA history.