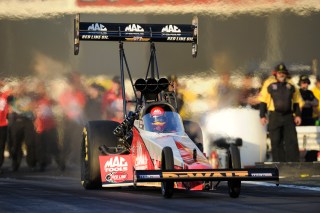 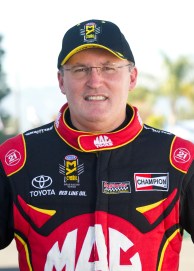 What went right in 2016: Kalitta had a great season, finishing second in the Top Fuel standings for the third time in his career. … For much of the season, it looked like Kalitta may go on to win his first Top Fuel championship, but a late surge by Antron Brown kept Kalitta from achieving his goal. … Still, the former sprint car driver reached the final round in one-fourth of the 24 races (four wins, two runner-up). Was part of major drag racing history, defeating teammate J.R. Todd in the closest Top Fuel final round finish — .000 seconds — at Southern Nationals in Commerce, Ga.

What went wrong in 2016: Kalitta’s championship hopes faded when he suffered three consecutive second-round losses in the Countdown to the Championship (St. Louis, Reading and Dallas). … Antron Brown clinched the championship in the second-to-last race (Las Vegas). If he had not, Kalitta may have had a last-gasp chance in the season finale, which he ultimately won, defeating teammate J.R. Todd. … Kalitta had three first-round exits in the first 18 races.

What to look for in 2017: With the success he had in 2016, Kalitta will have good momentum coming into the new season. He’ll have a new teammate (Troy Coughlin), who will replace J.R. Todd (moves to replace the departed Del Worsham in one of the Kalitta Motorsports’ Funny Car entries). Kalitta has the team, resources and talent to finally win the championship, but drivers like two-time defending champ (and three-time champion overall) Antron Brown and eight-time champ Tony Schumacher will be among the top obstacles for Kalitta to overcome. But the nephew of team owner Connie Kalitta has one thing to offer inspiration: good friend Ron Capps had to wait for more than 20 years and endure four season runner-up finishes before he finally won his first championship in 2016.