John Force has taught his racing daughters – Ashley (retired), Brittany and Courtney – quite a few lessons about drag racing over the years.

One of the most important lessons Papa John has imparted on his daughters is how to do a major league burnout. After all, the 16-time NHRA Funny Car champion is the undisputed king of burnouts in the sport.

Having just celebrated the one-year anniversary of her wedding to Verizon IndyCar Series driver Graham Rahal, Courtney Force had a chance a few days ago to put her burnout talents on display. 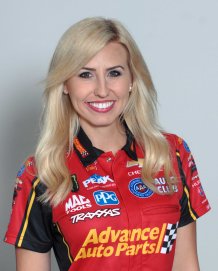 And boy, did she ever. She generated so much smoke from her rear tires that the fire department should have been on hand.

We’re almost ready to say that if John is the king of burnouts, Courtney is now the queen.

Courtney was loaned a brand new, red-hot (both its paint scheme, as well as the 650 horses it has under the hood) 2017 Chevrolet Camaro ZL1 to do some burnouts and quarter-mile passes at Auto Club Raceway in Pomona, California.

She literally smoked the tires off the Camaro with one of the most spectacular burnouts you’ll ever see come from a street car. If you think NASCAR drivers do great burnouts, wait until you see when Courtney mashed the pedal. Her car disappeared for several seconds in a massive display of burnout smoke before re-emerging.

“The best part about racing is the burnout,” Courtney Force said from behind the wheel. “For me, this is like a dream come true car. It’s a street-legal car that you can take right from the street and take it to a drag strip and race it.”

Thankfully, cameras were on hand to record the fun Courtney had, with NHRA reporter Amanda Busick – who appeared a bit apprehensive before climbing into the car – riding shotgun.

Needless to say, the fun only served to further whet Courtney’s appetite for the 2017 NHRA racing season, which begins in less than two months with the season-opening Winternationals at Auto Club Raceway.

“I’m already looking forward to testing in Phoenix (in late January),” said Courtney Force, who finished sixth in 2016, but has much higher goals for 2017.

“We’re going for a championship and I can’t wait to get to testing,” she said with a big smile on her face.

Here’s the video once again: