Editor’s note: One of the most talented photographers shooting a variety of motorsports series, with a number of different clients, is Jamey Price. Jamey and I met a few years ago as his career took foot, and it’s only grown in stature and ability since. Jamey shot most of this year’s Formula 1 calendar and has selected some of his favorite shots from the year. A dude that’s as cool as his shots, you can follow more of Jamey’s portfolio on Instagram, at @JameyPricePhoto, at Twitter at @JameyPricePhoto, on Facebook at Jamey Price Photographer, or on his website at jameypricephoto.com. Without further adieu, here’s Jamey…

I cover lots of different types of racing all over the world. I’ve had the privileged of attending almost the entire IMSA WeatherTech Season, the 24 Hours of Le Mans, the Lone Star Le Mans FIA World Endurance Championship round at Circuit of the Americas,as well as seven races of the Formula 1 World Championship, working as a small part of a talented team photographers with XPB Images.

Though history will remember 2016 as the year Lewis lost the championship, and not necessarily the year Nico won the championship, there was lots of on and off track drama elsewhere with some epic racing at iconic circuits. These are some of my favorites.

Though it may not be the most interesting F1 photo of all time, to me, this is what China is all about. Grey skies and a big long straight. As photographers, we walk the track backwards on Thursday so that we can see what we would see as the cars come past us, but also so that you catch most of the drivers walking by you. This is the Sauber F1 team doing their track walk into the Shanghai smog. Nikon D4, 190mm, 1/2000, f2.8

Though it is far from the most competitive car on the grid, I personally find the Manor to be one of the prettiest. It has lovely curves and an interesting livery. Even the back marker F1 teams build stunning works of automotive art that would demolish any other race car around a circuit. With the sun behind it, I underexposed the image to show the curves and edges. Nikon D4s, 70mm, 1/40, f22 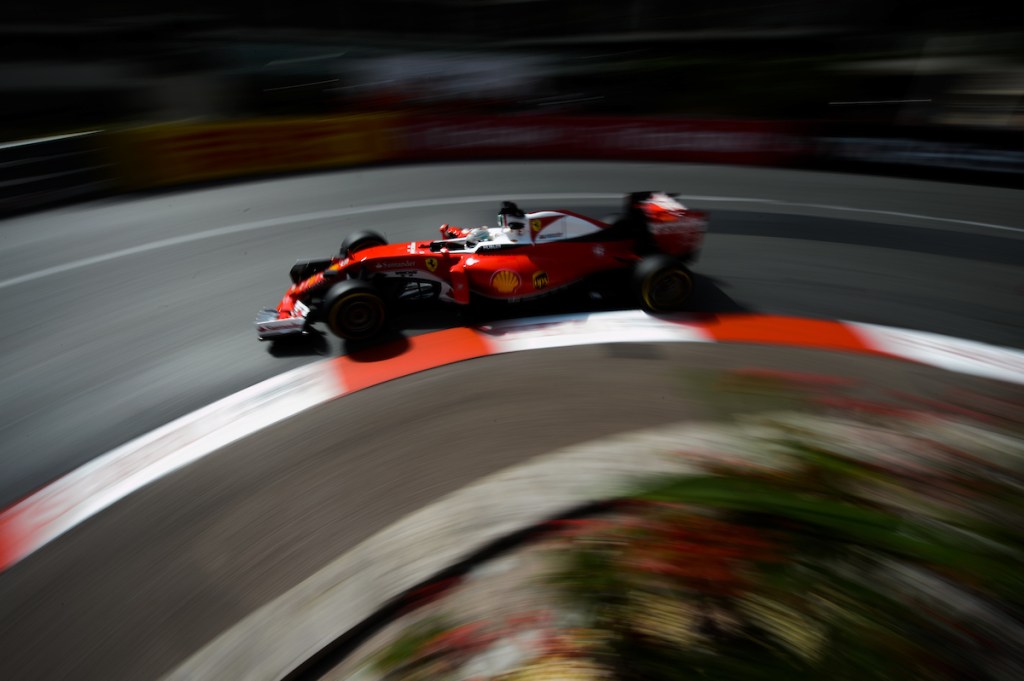 I personally can’t get enough of Monaco. There is no where else like it on Earth. Standing inside the famous Fairmont hairpin, the morning sun shone as practice 1 got underway. Monaco is the one track that you can feel the history oozing out of it’s every curve and piece of tarmac. Nikon D4, 14mm, 1/15, f22 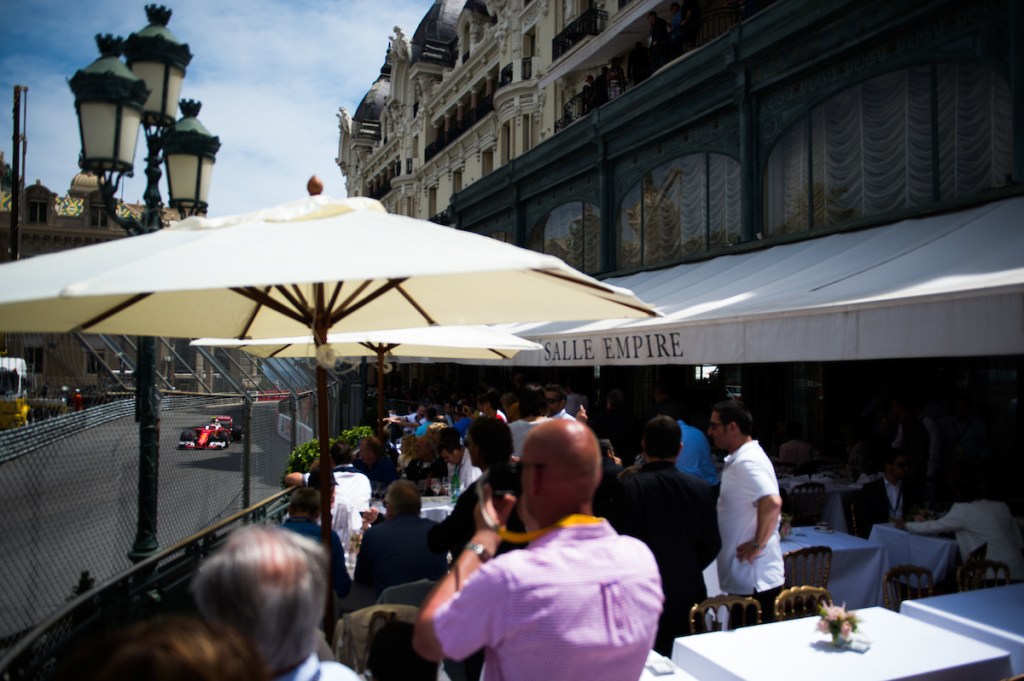 This is what Monaco is all about. The Glitz and glamour of an afternoon lunch at the Hotel de Paris in Monaco, while the F1 cars wiz by a few feet away during practice 2. I can’t imagine what it would have been like to be on this patio during the V10 days. Nikon D4, 27mm, 1/1600, f2.8

For the photographers, Monaco is the most special venue we visit, and it is made even more special when there is a cracking race to shoot. Daniel Ricciardo was on FIRE all weekend. He was determined to get his first Monaco win. But a pitstop error, and Lewis making his Mercedes nearly impossible to pass on the narrow streets ruined Ricciardo’s day. But for lap after lap, it was an epic battle and one that had me captivated watching it in person. Nikon D4s, 14mm, 1/1250, f4

I rarely post pictures from the usually dull and boring post race press conference. No one says anything of interest, and normally it is barely worth attending or shooting. But this one was different. Having just been denied a win at Monaco, Red Bull driver Daniel Ricciardo was inconsolable. His face said everything we needed to know about how his day had gone. Nikon D4s, 500mm, 1/125, f4 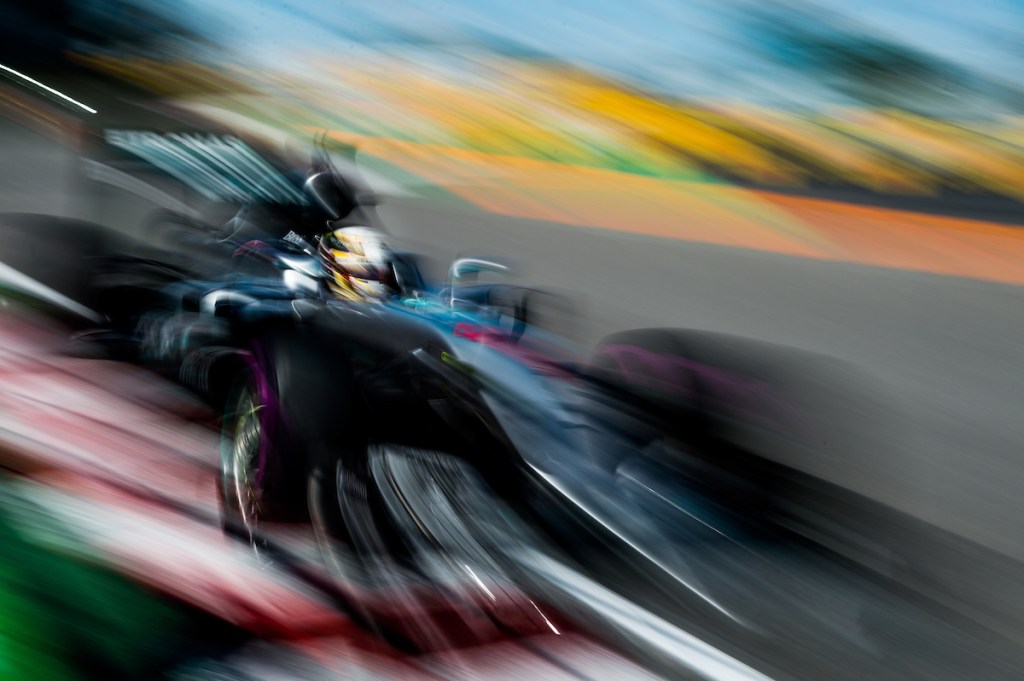 I love shooting at the Wall of Champions. The cars are SO close and you can see the energy that the driver is carrying through the corner and then as they pass more or less underneath you. It is a hair raising place to stand, and one that makes you feel very much alive. Lewis Hamilton is always a fun driver to watch through this corner as he hurls his Mercedes from curb to curb then roars past the wall and onto another lap. A slow shutter speed and a lot of practice and luck created this picture. Nikon D4s, 60mm, 1/15, f18

Max Verstappen, there aren’t really enough things you can say about this young gun. He has an air, a presence about him that you don’t see in very many drivers. He has an intensity that is captivating to shoot. Nikon D4, 500mm, 1/800, f4 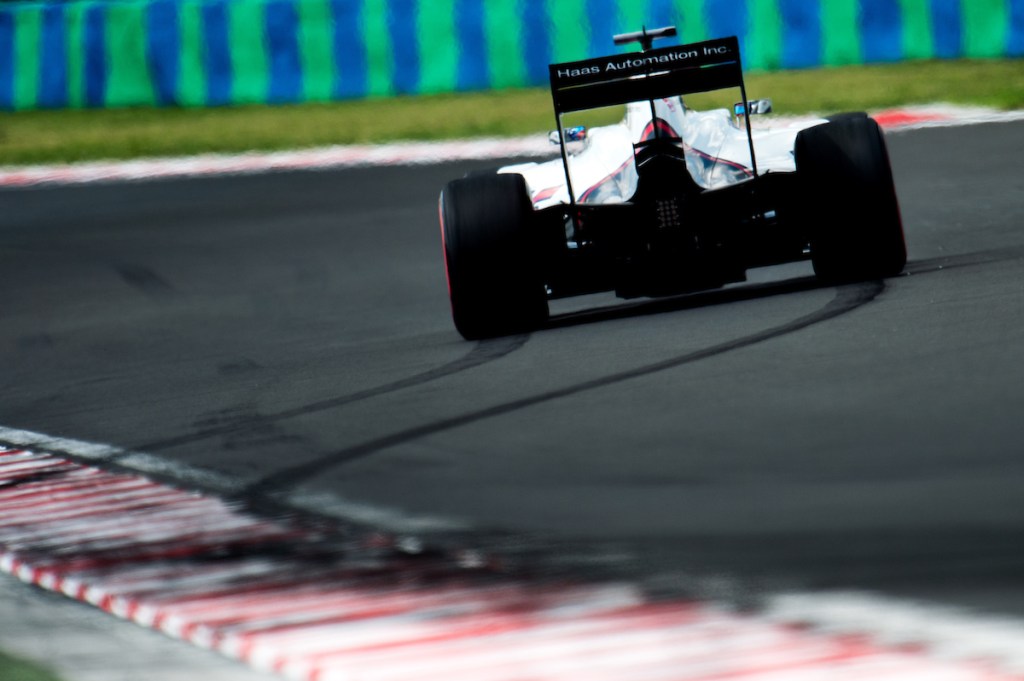 Romain Grosjean stomps the loud pedal hard exiting a corner at the Hungaroring during friday practice. I am often hunting for areas with interesting or unique backgrounds and just happened to get lucky with the Frenchman really throwing his Haas F1 car around and burning a set of Pirelli tires. Nikon D4s, 700mm,1/1000, f6.3

Modern F1 cars don’t throw sparks like they used to, but it can still be a good fireworks show on occasion. From an elevated position, I watched as lap after lap, the Red Bulls would come into turn 2 and throw sparks high into the sky. So I waited for the right moment, and caught one of them in the act. Nikon D4s, 500mm, 1/2500, f5

After hot and humid conditions all weekend, it was bound to pour rain at some point, and so it did, about 30 minutes before qualifying. It was torrential. I huddled under a port potty with a few fellow photographers until we heard the cars start coming out again. The rain eased up for a minute, then got even heavier, but not before some of the cars had already started a lap. It was quickly red flagged. Nikon D4s, 500mm, 1/800, f7.1

The personalities are what I love most about F1. Not the cars. Not the tracks. The people. On the grid, Sebastian Vettel had a nice moment with Team Principle Maurizio Arrivabene. Arrivabene looks like a tough boss, but also a caring one too. The Scuderia has struggled for the last decade, but hopefully with these two continuing to push hard, things will come around. Nikon D4s, 24mm, 1/640, f2.5

Bottas is a driver I like a lot. He doesn’t have much drama associated with his life, he is intense, quick in the car, and photogenic. One of my favorite times to catch drivers in the moment is as they prepare to head to the grid before a race. The intensity is always very evident and can be felt in their eyes and facial expressions. Bottas is also very proud of his heritage and the white Williams Martini Racing car acts as a nice reflector of the light into his eyes. Nikon D4s, 500mm, 1/640, f4

Though it is a recent tradition, the drivers are now required to line up for the host countries’ national anthem. It can be a nice place to get scenic shots, as well as the drivers lined up in one place. Monza’s grid is always chaotic, but a rare quiet moment is something to be cherished. Though I like this photo, if I had waited 20 more seconds, I would have caught the Tri Colore fly over in the frame too, but to be honest, I forgot it was going to happen, so I shot this frame then moved to another location. Nikon D4, 18mm, 1/1600, f2.8 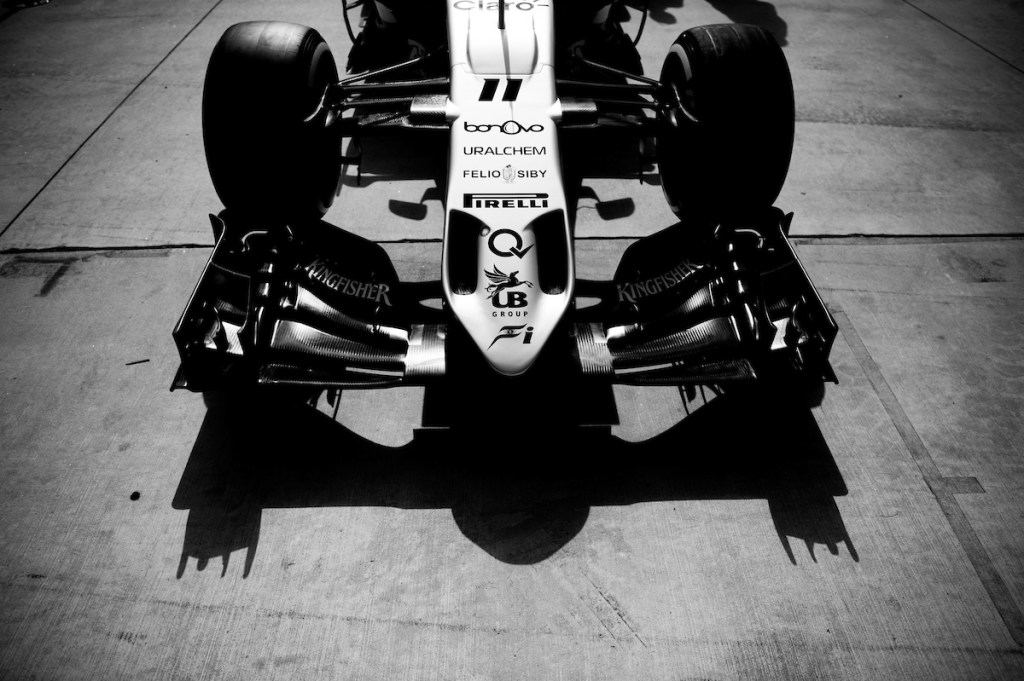 Formula 1 cars are beautiful. Each is different and for different reasons. The Force India has a very unique nose cone with the slits on either side. Gorgeous afternoon light in Austin allowed me to underexpose the car, and let the shadow come out even more than normal. Waiting for the cars to go through scrutineering is one of the best times to catch them out in the open and in a quiet environment. Nikon D4s, 24mm, 1/5000, f2.8

Austin isn’t my favorite circuit. It’s big, and can be brutally hot, and finding new places and ways to shoot something that size can be hard, but shooting through a photo hole as the cars dance through the esses, I used a very slow shutter speed to catch the Haas F1 car heading toward turn 4 during friday practice. Nikon D4s, 500mm, 1/20, f22

Qualifying 3. This is where it counts for the teams and drivers. It’s also one of the best times of day to shoot at Circuit of the Americas. The sun is backlit to a good portion of the track, and the shadows get a little longer. As Hamilton left his garage for one last attempt at pole, I underexposed his Mercedes to create a silhouette and outline of the triple World Champion. The Mercedes’ silver livery also helps this a lot. Though 60mph doesn’t sound very fast, you don’t have more than a fraction of a second to nail the photo before the car is gone, and not to be seen in that spot again. Nikon D4s, 500mm, 1/1600, f7.1

Mexico’s stadium section is one of the best parts of any circuit we visit. The crowd and their energy are IMMENSE. It also makes for fun photos as there is “Mexico” sponsor boards across the track and written on the ground too. So panning the cars as they wound their way through this tight section made for fun use of color and lines. Nikon D4s, 125mm, 1/8, f20

After everyone had been kicked off the grid mere minutes before the race was to begin, I waited trackside next to the catch fence at the start finish line, as Lewis and Nico lined up across from each other. The championship was getting closer and closer and a Hamilton victory would put him within reach of his 4th world title. Theirs was the best kind of rivalry, and one that F1 fans will certainly miss, no matter which team or driver you chose to support. Nikon D4s, 500mm, 1/3200, f4