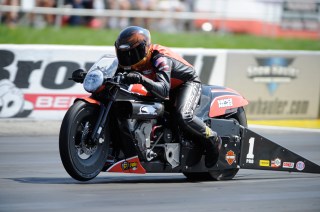 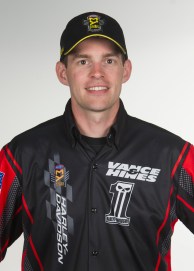 What went right in 2016: Hines had a championship season – but without the championship. He earned five wins in 16 starts and reached the final round 9 times. Had strong battle with teammate Eddie Krawiec (finished second) and surprise 2016 champion Jerry Savoie.

What went wrong in 2016: Hines was in the championship battle until the final race, but when he lost in the quarterfinals in the season-ending event at Pomona, that ended his title hopes, finishing a mere 31 points behind champion Savoie. … Not a lot went wrong for Hines overall, but he seemed to struggle at times during the six-race Countdown to the Championship playoffs, including second-round losses at St. Louis, Dallas and Pomona, and lost in the finals at Charlotte and Las Vegas (recording a rare red-light foul at the starting line). Had he been able to turn one of those losses into a win, he might have been able to overtake Savoie.

What to look for in 2017: Hines is one of the toughest competitors in Pro Stock Motorcycle. To come so close to yet another championship in 2016 will definitely be a rallying cry and incentive for him and his team in 2017. Don’t be surprised if Hines gets off to a big start – and carries it on all the way to a sixth championship.