MotorSportsTalk wishes you a Merry Christmas as we continue our season-ending reviews of the top drivers of the 2016 NHRA Mello Yello Drag Racing Series season.

Through Jan. 4 (we started this series on Dec. 12), we will feature a daily in-depth review of a driver that finished in the top-five  in each of the four professional classes (Top Fuel, Funny Car, Pro Stock and Pro Stock Motorcycle), as well as a compendium of select other drivers that did not finish in the top-five.

The list of drivers we’ve already posted is below. Today, our Christmas present to you is the 2016 season in review of 16-time NHRA Funny Car champion John Force: 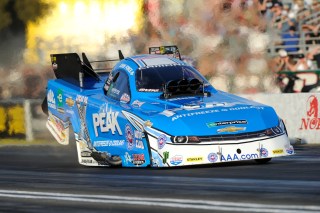 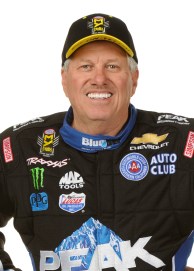 What went right in 2016: Force earned four wins, most in a season since he won four in 2013, when he captured his 16th and most recent Funny Car championship. … Reached the final round in three of the six races in the Countdown to the Championship playoffs, including wins at Charlotte 2 and Las Vegas (beat daughter Courtney Force in the final round). Lost to Tommy Johnson Jr. in the final round of the season finale at Pomona.

What went wrong in 2016: While the ageless Force showed he’s still one of the most successful and toughest drivers to beat on the Funny Car circuit, he was haunted by 10 first-round losses – nearly half of the 24-race season – including three straight (Seattle, Brainerd and Indianapolis), as well as back-to-back first-round losses in the Countdown (Reading and Dallas). Had Force cut down on the number of first-round exits, he had the potential to win a 17th championship.

What to look for in 2017: Force is rumored to be getting the old band back together: although no official announcement has been made yet, he will reportedly have a number of old faces back with John Force Racing in 2017, including crew chiefs John Medlen and Jimmy Prock. That could be just the thing Force needs to get him over the hump and win title No. 17. Force still has hopes of winning 20 championships in his career, and 2017 has the potential to allow him to move one title closer to that ultimate goal.