Texas Motor Speedway endured a challenging 2016 season with rainouts and weepers delaying both its NASCAR and INDYCAR weekends.

INDYCAR added a touch of humor with a new title sponsor for its 2017 race, with Rainguard Water Sealers confirmed in December on a multiyear deal.

Now, hopefully the need for said sealers – or other track drying elements – won’t be required as Texas has today announced a new, major repaving project that the speedway plans to complete about a month before the first Monster Energy NASCAR Cup Series weekend in April.

IndyCar will be back in its usual June date – June 10 – this year after the remainder of the 248-lap race from Lap 72 onwards was postponed from June 12 until August 27 this year.

Track president Eddie Gossage said even though drivers love the old track surface, with it being 20 years since the Speedway first hosted NASCAR Cup and IndyCar races in 1997, the inconvenience to fans was worth the fresh round of investment.

“The fans are why we are doing this,” Gossage said in a release. “The old pavement no longer dried as quickly because through the years of use and weather, the asphalt became porous, kind of like a sponge. Even if we only had a brief shower it was taking us far too long to get the track dried in order to get on to the racing. We owe it to the fans to present the best possible race track so they will be assured of seeing NASCAR and INDYCAR races even if we face some brief inclement weather. This will accomplish that goal.”

Of note, NASCAR Talk’s Nate Ryan hinted in November that a repave at Texas was all but inevitable, and an idea stemmed from NASCAR on NBC reporter and part-time Camping World Truck Series driver Parker Kligerman to not just repave the track, but reconfigure it as well.

The key details of the repave are below, via the release: 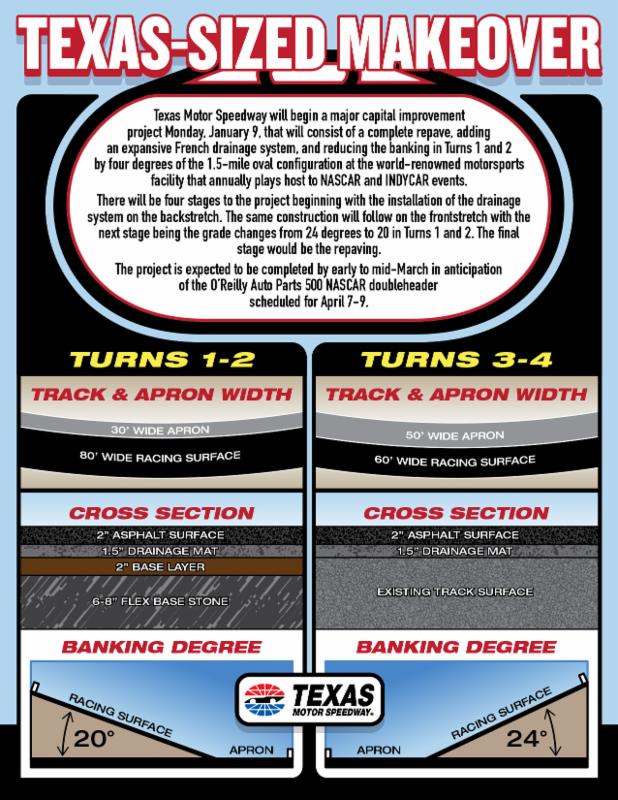