There’s no beans, meat, green peppers or hot sauce in this Chili Bowl.

But the menu of action will still be plenty spicy to leave fans who attend the 31st Lucas Oil Chili Bowl Nationals in Tulsa, Oklahoma hungry for more over the next five nights, starting with Tuesday’s opening round of qualifying (practice takes place Monday).

Action continues Wednesday, Thursday and Friday and culminates with the A Main final event on Saturday night at the Tulsa State Fairgrounds River Spirit Expo Center.

A record 400-plus teams and nearly 55 drivers are entered in the event that is the Super Bowl of indoor Midget racing on a quarter-mile indoor track.

Budding NASCAR star Rico Abreu, who completed his first full season in the NASCAR Camping World Truck Series in 2016, is the two-time defending champ of the Chili Bowl and is looking to make it three in a row this year.

Abreu is hoping to close in on Kevin Swindell’s Chili Bowl record of four consecutive wins from 2010 through 2013. 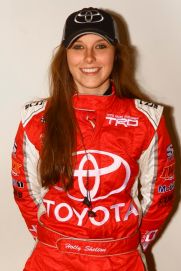 One of the biggest storylines for fans to keep an eye on is 21-year-old Toyota-sponsored driver Holly Shelton, who is seeking to become the first woman in history to reach Saturday’s A Main feature.

Shelton (pictured) also hopes to become the first female driver to reach the B semifinal round since Bev Griffis did so 28 years ago in 1989.

Shelton finished in the top 10 in both the USAC and POWRi national Midget Series standings last season.

Two years ago, at the age of 19, Shelton defeated both Larson and Stenhouse in a Winged Outlaw Kart race at CycleLand Speedway in Sacramento, California.