The Verizon IndyCar Series will continue with the same channels and networks as it did in 2016, with NBCSN carrying 12 of the 17 races, including the last nine races in a row from Texas through the season finale at Sonoma.

INDYCAR has hailed a 55 percent growth in its combined increase in viewership across both networks since 2013.

Once the second half of the Monster Energy NASCAR Cup Series schedule shifts to NBC and NBCSN from July, there will be several weekends where all three of NBC’s flagship motorsports series – NASCAR, IndyCar and Formula 1 – will be on on the same weekend.

“As the U.S. television home of motorsports, we’re proud to showcase the thrilling speed and exciting racing that the Verizon IndyCar Series delivers each year,” Jon Miller, President, Programming, NBC Sports & NBCSN said in a release. “Our INDYCAR coverage in 2016 reached more fans than ever before, and we look forward to building off of that success as we crown yet another INDYCAR champion on NBCSN in 2017.”

Additional programming – practice and qualifying sessions – will be announced at a later date.

Owing to the head-to-head air times between NASCAR and IndyCar on July 16 and 30, the Toronto and Mid-Ohio races will air LIVE on CNBC, with same day encore presentations on NBCSN. Those CNBC windows are both at 3 p.m. ET. 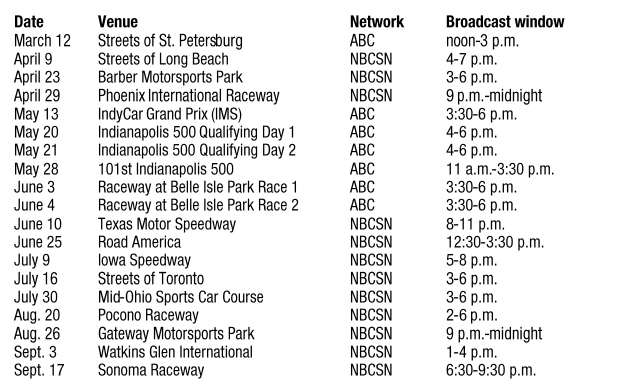