Last month’s Race of Champions, held in Miami for the first time, brought together an all-star list of drivers and champions from around the world, through various disciplines of motorsport. But the event also held the ROC Factor North America fan vote, allowing talented but under-the-radar drivers through to the race if they won the vote and gathered enough support with which to do so. 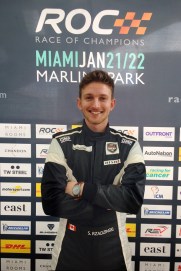 Stefan Rzadzinski was a name known to only the most diehard of Mazda Road to Indy observers prior to winning this competition, beating Conor Daly among others en route to capturing the opportunity to be James Hinchcliffe’s teammate at the race. The 24-year-old Edmontonian’s open-wheel career began in reverse – he’s the only driver in MRTI history to have done all three series “backwards,” starting in Indy Lights before moving to Pro Mazda, then to USF2000, owing to what was the right opportunity he could pursue with the necessary budget.

Last year, he took on the Nissan Micra Cup competition in his home country. He won several races and contended for the championship, and pioneered “reverse donuts.”

All the while, Rzadzinski never lost faith he’d have his shot on another worldwide stage, even as his day job comes with working at a software company called Frontech Solutions, Inc. in Edmonton, in their marketing and sales division.

“I always wanted to get to IndyCar but after Edmonton lost the Indy (after 2012), that made it tougher. But I’ve never given up faith that I could do it in motorsports,” Rzadzinski told NBC Sports.

“I’ve just not been satisfied leaving it. I want to open doors, make things happen still. I’m really happy life has taken me along the way it has… I got my university degree, I work another job as well, and that adds to my story. You think you may not make it, and I still don’t have a ton of money. But this experience was about trying to show that I really still care about this. I think people have been excited by the story – I want to take people for the ride!”

Indeed what followed from the time Rzadzinski was revealed as one of 10 finalists to win ROC Factor North America was a promotional blitz where he’d let everyone he knew, or close to it, of how close he was to winning the competition. Several Canadian media outlets picked up on it and once Rzadzinski got past the usual Canadian dose of humility, not wanting to feel guilty about promoting himself, it became easier.

“Part of what got me there was being uncomfortable, but I got more comfortable as time went on,” Rzadzinski said. “It resonated with people… even though I felt a bit bad about spamming feeds! I could write a book about those three-four days.

“But the big key for me in winning was to show I wasn’t just the Facebook winner. Once I got to Saturday night, the game face went on because you have to refocus and deliver.”

Rzadzinski wasn’t in the individual Race of Champions competition on Saturday, but took part in the Nations’ Cup on Sunday as Hinchcliffe’s teammate.

And that’s when the fun started.

Despite a loss to Kyle Busch first, Rzadzinski rebounded from there. Rzadzinski drew Indianapolis 500 champion Alexander Rossi with the two racing in NASCARs, and Rzadzinski won that heat. A last-minute shift to one of the RoC Buggies for his third race – this wasn’t the car he’d planned to race – saw Rzadzinski jump into that and beat Red Bull Global Rallycross champion Scott Speed, so he’d gone 2-3.

“The RoC Buggy was my favorite, by far, and I raced it against Scott Speed!” Rzadzinski said. “I’d only driven it once before. With each car, you only have two to three minutes in it once before. I drove the buggy once, and this thing is awesome… but I didn’t drive it until the race against Speed, because I’d been told I’d be racing the Ariel Atom.”

It speaks volumes of the competitor Rzadzinski is he was disappointed with only going 2-3 in his runs, with a gear level issues sidelining Hinchcliffe in his run to knock ROC Factor Canada out of the event. Rzadzinski reflected on the experience in the moment.

Kudos to ROC Factor Canada racer @rzadracing for taking on the big guns at #ROCMiami. And beating two! https://t.co/Ha0JIX0kox

The thing that stood out though about Rzadzinski as much as his on-track performance, which was impressive beyond belief, was his pure, unfiltered joy at being part of the event.

It’s easy to get cynical, sidetracked or frustrated in racing and for Rzadzinski, losing sight of how cool this moment was was not an option.

“I want to be an ambassador. I’m proud of this sport, and I grew up in love with it,” he said. “I want to represent it well and this sport is awesome… with all the personalities. It’s a special world. It’s just not normal. The excitement is still there, whether it’s F1, IndyCar, NASCAR, WEC, or Le Mans.

“It’s really cool stuff and I don’t think we tell the story well enough. This is really cool with what we’re doing. I won the vote because people saw it mattered to me. You can’t be nonchalant about it, it’s important to have passion and emotions about what we do. Meeting those guys at the weekend, they’re the best at what they do, but they are regular guys.”

Rzadzinski admitted to having one “fanboy” moment when he and a couple friends were delayed getting to the track on Saturday and needed a lift, and got one in the form of four-time Formula 1 World Champion Sebastian Vettel.

“It was one of many surreal moments – but the inner fanboy in me was like, it’s Sebastian Vettel!” Rzadzinski exclaimed. “We missed our shuttle from the hotel to the track, and one of the RoC organizers says he could take us. So he comes by, no problem, and we jumped in the car with him and (Pascal) Wehrlein. My friend Dennis and I rode to the track with Sebastian. We’re back there and that was the one guy where it’s like, just play cool, be normal!

“But they all are normal. He was fantastic. There’s a whole new level of respect for a guy like him. He took this event seriously… he wanted to win. Seeing how he operated, but also chatting about non-racing stuff. You can’t take it away.”

Rzadzinski was quick to praise not just Vettel but all his peers at the event, including his teammate Hinchcliffe who’d been there for him in 2011 as an 18-year-old Indy Lights debutante in Edmonton.

“It started at the Edmonton Lights race… I said, ‘Hey I’m doing this race, and I know you won here the year before, if you’re around the track lemme know.’ We connected, did the track walk, and went for dinner. He’s a really genuine dude. Even on Dancing With The Stars, everyone sent him a note… I’m sure you get swamped. But I was super pumped for him. He took the time to respond. I can’t say enough good things about him. Behind the scenes, there’s much more to him.

“(Tom) Kristensen said ‘I think, you were quiet, respectful, asking questions… but deep down you knew you could do it and deliver.’ Getting that little bit of respect from guys like TK that I’ve looked up to, that’s a cool moment.

“I just want to hang out with them and learn… there’s so much more to learn! But so much more to the craft than just this. Pick their brains and be around them. Take a piece of that, and have a successful career in this sport.”

Rzadzinski, who is set for another season in Nissan Micra Cup this year with Groupe Touchette support but who arrived on the world stage via this event, said this whole experience wouldn’t have been possible without the people around him. More of his story is chronicled via his social channels (@RzadRacing on Twitter and Instagram).

“When you have time to give back, people appreciate it – they appreciate it coming from you. That’s how they get invested. We want more fans in the sport. For me, I don’t see it as a distraction at all. They’re the people who got me there.”