Now comes word Wednesday that Pritchett will have Papa John’s Pizza as primary sponsor of her Don Schumacher Racing dragster for most of the 2017 season, which begins with this weekend’s Circle K Winternationals in Pomona, California. 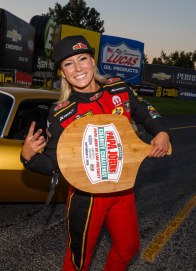 In addition, Papa John’s has signed a deal to become the “Official Pizza of the NHRA” in 2017.

Pritchett, who was sponsored for two races by Papa John’s last season, becomes the first female athlete to be sponsored by the pizza brand.

“Last year was the start to a great partnership with Papa John’s,” Pritchett said in a statement. “I’m excited to continue racing my Papa John’s dragster that represents what the Pizza Family has evolved into over the last 32 years.”