AVONDALE, Ariz. – Yes, it’s only a test session, but Marco Andretti was fastest during the second of two three-hour test sessions on Friday for this weekend’s Verizon IndyCar Series Prix View at Phoenix International Raceway.

Last year, five of the top-10 speeds in the night session were Hondas and this year, it was seven of the top-10, including the top six.

Earlier in the afternoon, Andretti described some of the changes coming to his No. 27 team, with Bryan Herta his new strategist and with Eric Bretzman taking over as technical director for the team.

“It’s too early to tell about anything. Probably these two days will still be early as hell, but good so far, steady, really having fun working with Bryan (Herta), and even having Eric Bretzman there has been a good addition, as well,” Andretti said.

“We’ve been pushing it. That’s for sure. All I can say is the only thing that I think can help is just closing the holes up on the bottom of the floor. But that’s just me.”

Several yellow flags flew for track inspections, but there were no mechanical ailments or incidents during the session.

Arguably the most interesting part of this one was that Alexander Rossi and Ryan Hunter-Reay briefly swapped seats at Andretti Autosport, Rossi taking laps in the No. 28 DHL Honda and Hunter-Reay stepping into the No. 98 NAPA AUTO PARTS Honda, to see where each other was from a setup standpoint.

Rossi (24 laps) and Hunter-Reay (11 laps) added those laps to their laps in their primary cars to provide 23 car/driver combinations that took place in the session.

Although the ambient and track temperatures both dropped into the 70-degree range this session, Josef Newgarden’s lap from earlier Friday stood as the day’s fastest. 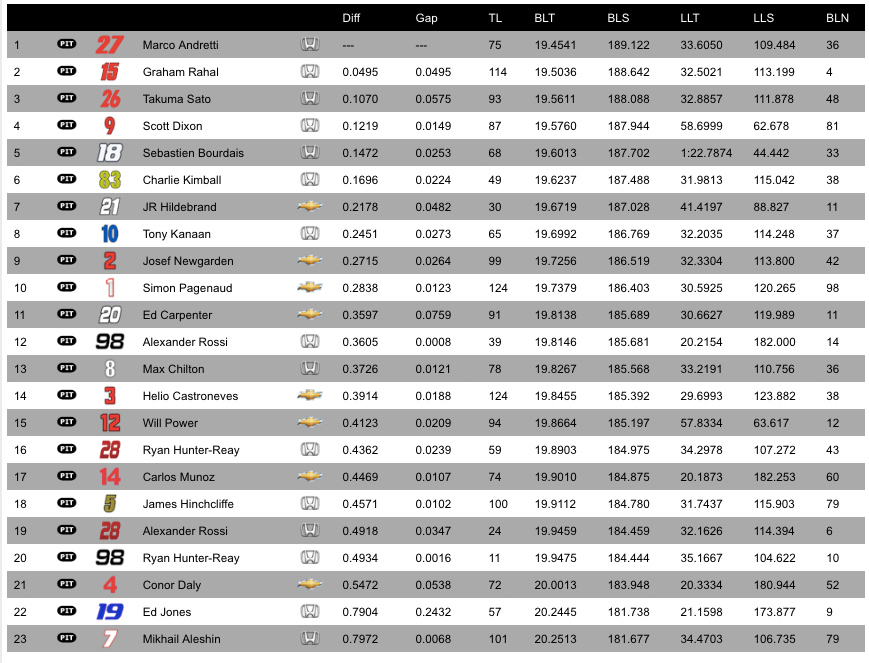