The Verizon IndyCar Series Prix View kicked off on Friday afternoon with the first of four test sessions over the next two days at Phoenix International Raceway. A glimpse at the time sheets yields little surprises, though the three-hour session did have its fair share.

Team Penske and Ed Carpenter Racing were the two quickest teams, with Josef Newgarden leading the way with a fastest lap of 190.129 mph (19.3511 seconds) in the No. 2 Verizon Team Penske Chevrolet.

In fact, Newgarden was the only driver to average more than 190 mph during the early afternoon session. Speeds were also up from last year’s opening session, during which Helio Castroneves turned the fast lap of 187.850 (19.5858 seconds).

Ed Carpenter was second quickest in a strong outing that saw him near the top of the time sheets from the outset. Will Power was third while JR Hildebrand had an impressive run to fourth on his return to full-time driving duties. Alexander Rossi rounded out the top five in the opening session.

Perhaps the most surprising performances came from the Dale Coyne Racing entries of Sebastien Bourdais and Ed Jones. Both were very quick from the outset, briefly running 1-2 early on, and Bourdais led much of the session before the final minutes, when both drivers were pushed down to eighth (Bourdais) and ninth (Jones). However, it remains an impressive debut for a squad that routinely punched above its weight last season.

The session was stopped three times for cautions, but only the first one resulted from an incident. Conor Daly’s No. 4 ABC Supply Chevrolet experienced smoke begin spraying from the back of the car in the opening minutes. Daly later reported that the engine was fine and that a small leak caused the issue. He did not return after only turning seven laps, but was confident the issue could be resolved quickly.

Also of note, Chip Ganassi Racing struggled somewhat in their first major outing with Honda engines and aero kits. None of their four drivers ranked in the top ten at the end, with Scott Dixon the highest ranked in 12th. Tony Kanaan (14th), Charlie Kimball (15th), and Max Chilton (17th) followed suit.

“A bunch did new tires at the end. For right now, the engine feels very good. For what we were doing, the lap times were fairly decent,” Dixon said. “It’s hard to tell how turned up they are. We’ll see how it plays out. Our testing program went really well.” 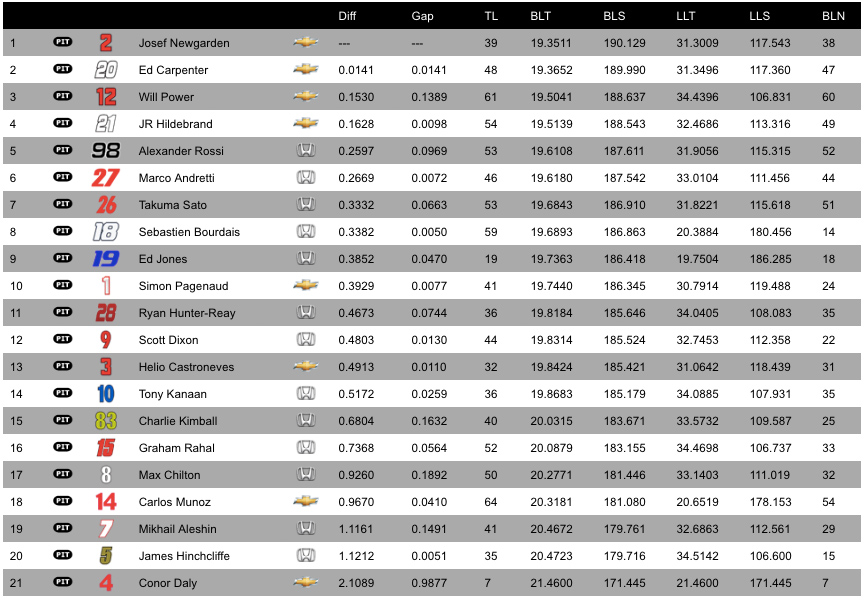