Both speeds are quicker than the official track record, last year’s pole run from Helio Castroneves at 192.631 mph and 19.0997 seconds.

But the 29-year-old who lives in Boulder had a feeling his Ed Carpenter Racing team, which was very fast at Phoenix last year, would be on pace almost from the off.

“We’ve got two whole days here. Honestly for us I think it’s great because it gives us that little bit of extra time to kind of make sure that we’re just hitting our marks along the way,” Hildebrand said Friday. “I had every confidence getting in the car first session that we were going to start in the window. It’s just about I think all of us together being smart about how we approach it, and for me it’s an awesome sort of little change of pace to be back at it full-time.”

Lest Hildebrand have all the fun at the top of the timesheets, his team boss and teammate Carpenter was second in the No. 20 Fuzzy’s Vodka Chevrolet with a best speed of 192.404 mph. His best non-tow speed was 191.298 mph.

Team Penske was next up with Josef Newgarden, Helio Castroneves and Will Power respectively before the first of the Hondas, Mikhail Aleshin for Schmidt Peterson Motorsports in sixth.

All of the top 11 runners in this session, held under overcast skies with ambient temperatures starting at 77 degrees and track temperatures of 94, were over the 190-mph threshold.

The first incident of the weekend occurred merely a few minutes into the session, as Alexander Rossi got low through Turns 1 and 2 in his No. 98 NAPA AUTO PARTS Honda for Andretti-Herta Autosport and backed hard into the Turn 2 wall. Rossi was checked and cleared to drive. However, this marked the first accident for Rossi, the 2016 Indianapolis 500 champion, in an IndyCar.

Back in the garages and the crew begins to rebuild in order to get the 98 back out for this evening's session. #IndyCar pic.twitter.com/T3EuXLT29z

Rossi only did one lap with his second lap seeing the accident occur on a planned qualifying simulation. Other low runners this session – Ed Jones, the rookie, only did eight laps, Marco Andretti did just 14 and Carpenter just 16.

Prior to the session, Helio Castroneves joined PIR officials for a groundbreaking session for the new construction and improvements for the “New Phoenix Raceway.” We’ll have a separate post on that to come.

Times and speeds are below. The final session of the weekend occurs from 6 to 9 p.m. MT and local time tonight. 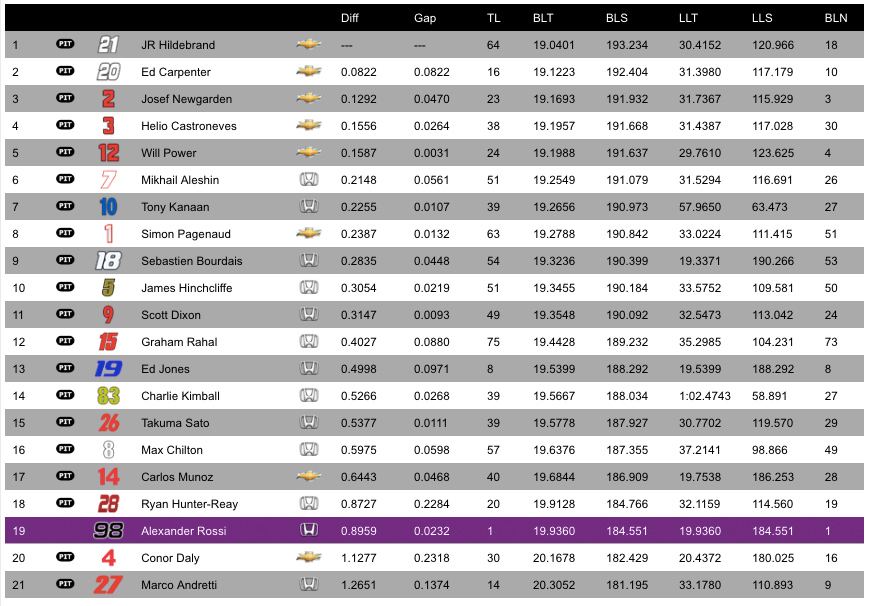