AVONDALE, Ariz. – After Alexander Rossi’s accident earlier on Saturday, two of his Honda teammates and another young driver also had accidents in the evening three-hour test session during the Verizon IndyCar Series’ Prix View at Phoenix International Raceway.

Graham Rahal and Takuma Sato both lost the rear ends of their cars as well in separate accidents, both at Turn 2. Then in the final 15 minutes, JR Hildebrand crashed in Turn 4.

Rahal’s occurred first, within the first half hour of the session while running behind other cars.

Sato’s was a bit heavier after he lost it on his own with about an hour remaining in the session. The Sato accident marked the second hit of the day for Andretti Autosport.

Hildebrand lost the back end off Turn 4, then careened to the inside retaining wall.

Here’s the four incidents, two captured via fans in the stands and two via the frequently helpful link hound Matt Archuleta (@Indy44) on Twitter:

@AlexanderRossi I hope you're ok dude … that was a pretty good hit. #indycar pic.twitter.com/UBk8IklTcg

Sato in the wall in turn two. Was being helped to the safety vehicle. #PrixView #IndyCar pic.twitter.com/nLAeifJROi

Meanwhile, yes, there was a session with green flag running still involved. And as last night, Hondas led the way with Ryan Hunter-Reay on top over Sebastien Bourdais, Marco Andretti, Max Chilton and Sato.

Whether that amounts to anything when the series returns here in late April remains to be seen. 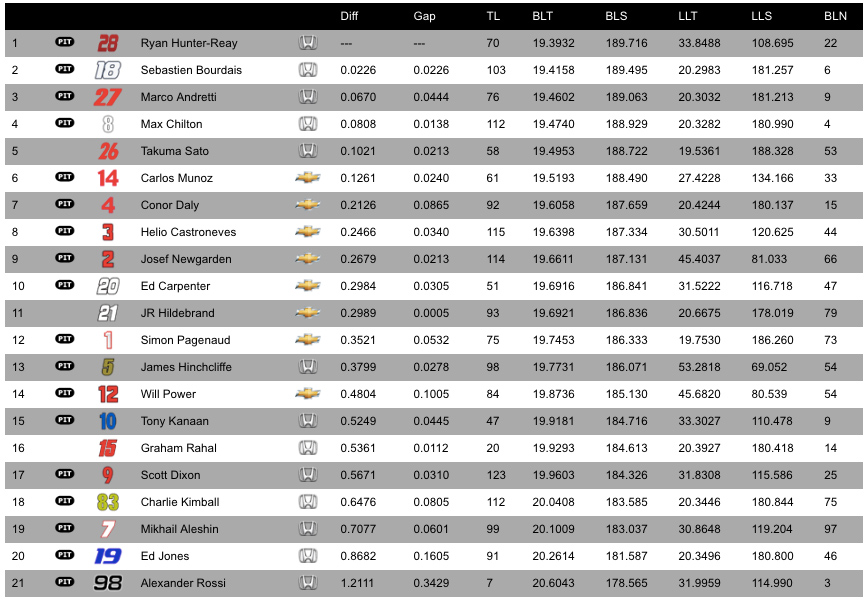