Dixon ensured Hondas had the top times in both sessions, with Marco Andretti having ended first this morning.

“The whole offseason has been so busy off the track for people at Ganassi, with a lot of work and trying to get caught up. It’s nice to have a refresh,” Dixon told IndyCar Radio after the session.

“Friday doesn’t mean anything other than mileage. We’ll hope to work with the changes we made today and make it better for tomorrow.”

Dixon’s best time was a 1:02.5591 in his new blue No. 9 GE LED Lighting Honda, with Power second and top Chevrolet at 1:02.8416 in the No. 12 Verizon Team Penske Chevrolet. Power, who had a slight incident in the morning, returned from that in that first session and ran fine today in this one.

Ganassi teammates Tony Kanaan and Charlie Kimball were third and fourth with Sebastien Bourdais completing the top five in the session.

The practice session was the first since the introduction of Firestone’s red alternate sidewall compounds that teams could run one set of reds in the second practice session. As such, most fast times in the session were set on the reds, but not Dixon’s. And that time on blacks which was more than a second up on Andretti’s best time of 1:03.7559 this morning.

For the 1st time since their introduction in 2009, each car has an extra set of alternates to run during Friday practice #FirestoneGP pic.twitter.com/xgGhuhSHM3

Another incident occurred in a rather weird spot on course, causing the only red flag of this practice. Takuma Sato ran off going into the Turn 13/14 hairpin but while his front tires locked up, his rear ones didn’t. The driver of the No. 26 Andretti Autosport Honda went hard into the concrete barrier, having just missed the tire barrier at corner entry by a fraction. He was OK but the Andretti Autosport team will have a bit of work ahead of them to repair the chassis for Saturday.

Times are below. Third practice runs at 10:50 a.m. ET and local time on Saturday morning. 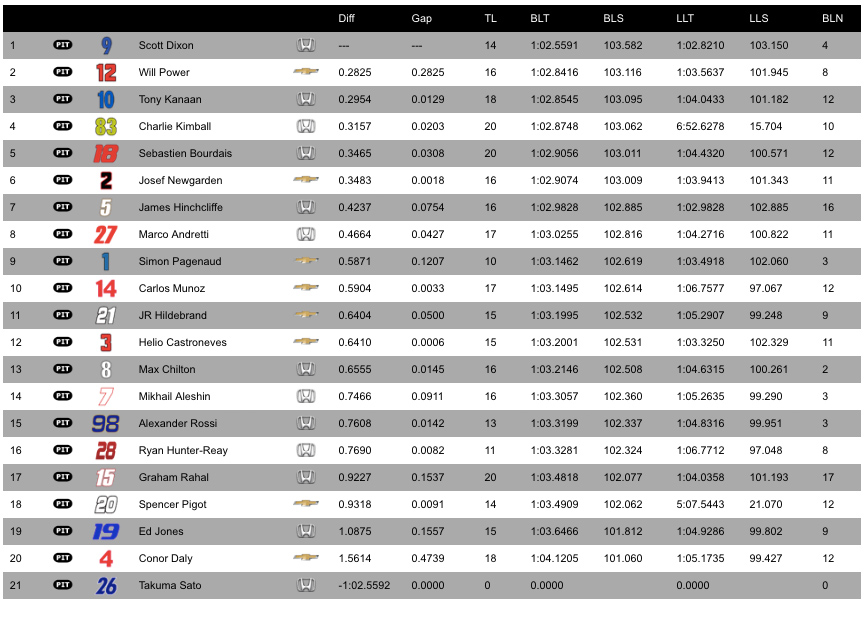