ST. PETERSBURG, Fla. – Marco Andretti led a Honda sweep of the top four in the opening 45-minute practice session for this weekend’s Firestone Grand Prix of St. Petersburg, the opening round of the 2017 Verizon IndyCar Series season.

Andretti, in the rebranded No. 27 hhgregg Honda for Andretti Autosport, set a best time of 1:03.7559 around the 1.8-mile, 14-turn street circuit. It’s a good start for the team, which made some operational changes where Eric Bretzman is the team’s new technical director and Bryan Herta is Andretti’s new race strategist.

“We’re off to a good start. It’s still early and we need to stay with it,” Andretti told IndyCar Radio after the session.

Tony Kanaan and Scott Dixon were second and third for Chip Ganassi Racing in their first official race weekend sessions back in Hondas, with James Hinchcliffe fourth ahead of defending series champion Simon Pagenaud the top Chevrolet in fifth.

Pagenaud’s teammate, Will Power, had another practice crash – as he did here last year at the Turn 9 kink. On this occasion, Power lost the back end coming through Turn 10 and knocked the rear wheel guard out of alignment, but was able to make it back to the pits under his own power.

Times were a bit slower than last year to start, owing somewhat in part to a last-minute track change this morning at Turn 3. The corner angle was changed from a sweeping right hander to a more angled turn with a new curb on driver’s right. A crest was there following a track repave prior to the weekend and cars were hitting the crest, then getting airborne during Thursday’s practice sessions for other series competing here this weekend. Temperatures were 81 ambient and 108 track to start the session, per Firestone.

Times are below. The second practice is scheduled to start at 3 p.m. This session was delayed a bit by accidents in previous sessions, qualifying for both the Cooper Tires USF2000 Championship Powered by Mazda and Pirelli World Challenge races. 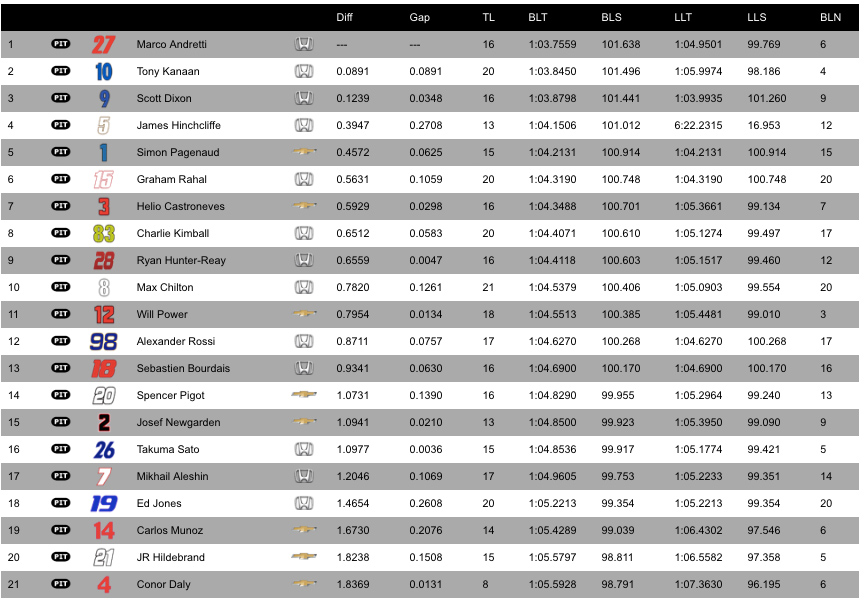