Will Power’s dominance on the streets of St. Petersburg continued Saturday as he secured pole for Sunday’s Firestone Grand Prix of St. Petersburg despite brushing the wall during Round 2. However, the car suffered no damage, and his fastest lap was just over the 1:00 mark, and came in at 1:01.064. It is Power’s seventh pole in eight years at St. Petersburg. He noted afterward that a decision to make one run in the first round helped set him up for later rounds. “It takes obviously a very good team and kind of getting through that first round there,taking the risk on just doing one lap was good for me, I definitely had a bit more meat on the tires in the last round there.”

Power also explained that and the No. 12 Verizon Team Penske group nearly went the wrong with chassis adjustments and had to backtrack before their pole run. “(We) made a bit of a wrong setup change there for the last round and kind of just made it and went back and did something else. So yeah, very happy to be on pole. It’s really tight competition.”

Power was one of only two Chevrolets to make the Firestone Fast Six, the other being his Team Penske teammate Josef Newgarden, who qualified fourth.

The other four slots went to Honda teams, who continued to show the strong pace they demonstrated in all three practice sessions. Scott Dixon led the Honda contingent in second, with James Hinchcliffe in third. Takuma Sato and Tony Kanaan qualified fifth and sixth. This marked the first time in the manufacturer aero kit era Honda has done so; Honda’s best effort in the Firestone Fast Six last year was at the IndyCar Grand Prix when Hinchcliffe, Graham Rahal and Jack Hawksworth all made it.

Dixon later explained that a crucial error on his part might have cost him the pole. “I think the team and Honda did the job. I just did not. I made a pretty big mistake on my first lap, which definitely disappointed, and we had a pretty smooth weekend. The car was super fast and came up short, but it’s qualifying. Hopefully tomorrow I can redeem myself and we can snap up an extra spot, but good round for the weekend, especially for the whole team.”

Honda’s strength was not the only surprise in qualifying. A number of high-profile drivers who had been running quickly failed to make it out of Round 1 of qualifying. Chief among them, Team Penske teammates Simon Pagenaud, sporting the No. 1 as the defending Verizon IndyCar Series champion, and Helio Castroneves failed to advance to round two. They will start 14th and 16th. “Well, we’re certainly disappointed, but that doesn’t mean we’re going to pack up and go home,” Pagenaud asserted after qualifying. “The PPG Chevrolet team and I will go to work and figure out how we can improve. They are the best in the business. We have our work cut out for us, but once the race starts, all sorts of things can happen.”

Also failing to advance was Andretti Autosport’s Marco Andretti, who was fastest in opening practice on Friday and noted that he and team overcompensated for an oversteer issue when they ran on the primary black tires. Andretti will start 15th.

Two drivers made contact with the wall during qualifying, ending their sessions prematurely. Sebastien Bourdais speared off course entering turn 13 on his out lap during Round 1, an incident that caused a red flag and parked Bourdais for the session. He will start 21st. Meanwhile, Ryan Hunter-Reay flirted with the wall several times before eventually brushing it in Round 2. It did not stop the session, but Hunter-Reay ‘s car was damaged enough that he did not continue. He will start 12th on Sunday. 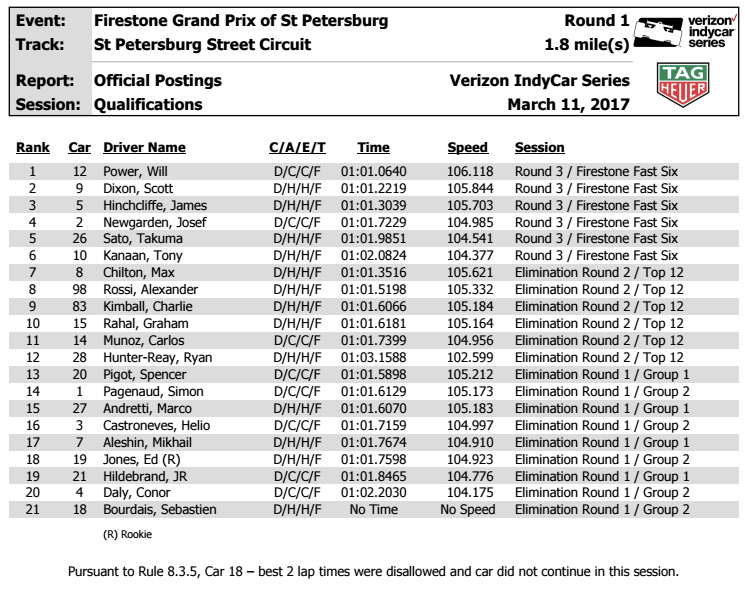