Over the last 20 years or so, it’s been very common to see a Don Schumacher Racing car atop the NHRA Top Fuel ranks.

But if you look at what has taken place in the first two races of the 2017 national event season, there’s a potential new DSR champ in the making.

Leah Pritchett won both races (Pomona, California and Phoenix) and goes for three in a row in this weekend’s Amalie Motor Oil Gatornationals in Gainesville, Florida. 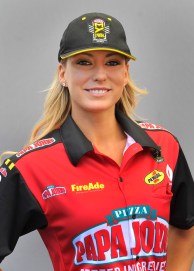 In terms of status and importance among NHRA national events, the Gatornationals is considered among the top four or five races in the 24-race season.

And like Brown, Schumacher and her other teammates at DSR, Pritchett is ready to prove that she’s for real and that she will be a force to be dealt with in the remainder of the 2017 season.

“What we did in the first two races wasn’t a fluke,” Pritchett said. “We want to prove it to ourselves and everyone else.”

Pritchett has been on fire thus far this season. And with the significance of the Gatornationals at this early point of the season, she’s determined to keep things going and continue doing what she’s been doing thus far.

“We’ll have the same routine at Gainesville that we had at Pomona and Phoenix,” she said. “We’ll keep our noses to the grindstone and show we are worthy of what we have accomplished so far this year.”

Even though she earned her first career Top Fuel win, Pritchett still had somewhat of a rough season early on in 2016. She began the season driving for Bob Vandergriff Jr. Racing, only to have the team unexpectedly fold out from under her. She raced for a couple of other teams before Schumacher signed her.

That’s when things started to get a lot better. That she made the Countdown to the Championship was a testament to Pritchett’s never-give-up attitude.

Of course, having arguably the best overall team in drag racing behind her didn’t hurt. And now that she has full sponsorship for 2017 from Papa John’s Pizza, along with the best minds in the sport at DSR, Pritchett isn’t letting her chance in the sun go to waste.

“My mindset is the same as when we went to Pomona after we ran the quickest time and fastest speed ever (3.654 seconds at 331.85 mph) in testing the week before (at Phoenix),” she said. “We had a nice test session and felt we had to do something to prove that our 3.65 was real.”

Knowing the significance of Gainesville, as well as to keep on the roll that began at Pomona, Pritchett is ready to go for the jugular in the first qualifying session on Friday. There are four qualifying sessions this weekend, two on Friday and two more on Saturday.

“Qualifying is still important,” Pritchett said. “Being No. 1 at the first two races enabled us to have bye runs in the first round because we only had 15 cars.

“I’m sure we’ll have 16 this weekend but qualifying always is our top priority. Our focus is extending the gap (her points lead) over the field.”

Not surprisingly, success on the drag strip has kept the 28-year-old Pritchett equally as busy off-track over the last month and during her current winning streak, with heightened media attention and fan outreach.

“I’ve been busier this week and this month than I’ve ever been before,” she said. “I was on the road for 31 days before I finally got home to (Indianapolis) last week.”

But that’s okay, Pritchett said. She’s having the ride of her life both in her dragster and with the fans. And given how she’s started, don’t look for things to drop off anytime soon.

“I don’t know how to stop,” Pritchett said.