Takuma Sato, who banked a top-five finish in the No. 26 Andretti Autosport Honda at the season-opening Firestone Grand Prix of St. Petersburg last weekend, was on top as Hondas were in five of the top six positions in the first three hours of testing.

The second three-hour run occurs from 2 to 5 p.m. Teams have four sets of Firestone tires for the day with the exception of rookie Ed Jones, who has one extra set available.

Meanwhile, to get a sense of just how much of a roller coaster the Birmingham, Ala. road course is, INDYCAR has released another of its stunningly cool “Visor Cam” videos, this time with Indianapolis 500 champion Alexander Rossi in the No. 98 NAPA Auto Parts Honda for Andretti-Herta Autosport.

The other news nugget of note is Juan Pablo Montoya making his first IndyCar test run this season, in Team Penske’s No. 22 Chevrolet, as preparation for his two races at the Indianapolis Motor Speedway in May. Montoya, the two-time Indianapolis 500 champion, will run a fifth Team Penske entry at the IndyCar Grand Prix and 101st Indianapolis 500 presented by PennGrade Motor Oil.

Times from this morning are below. 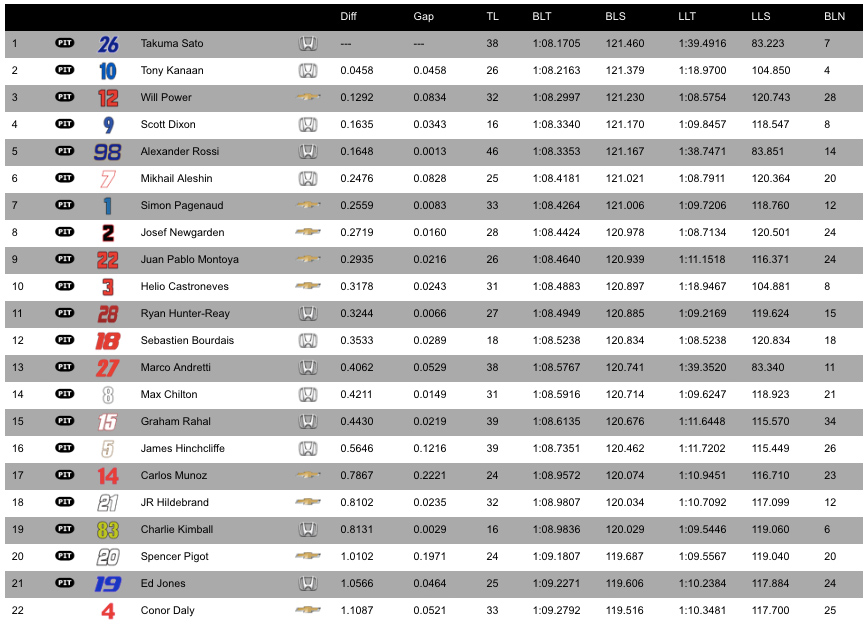