Team Penske stormed to the front in the second session of the Verizon IndyCar Series’ open test at Barber Motorsports Park, with three Penske drivers in the top five spots at the end of the day. Will Power led the way with a lap of 1:07.7518, which he turned as the checkered flag waved on the session. Power’s time pipped Chip Ganassi Racing’s Max Chilton by just under eight thousandths of a second (Chilton’s lap was a 1:07.7591).”It just shows how tight it is between Honda and Chevy now,” Power said of the narrow gap between lap times. “It’s tough, man. We just went through a bunch of stuff to see what it does and I think we got some good answers here. I think we’ve got a good car for here, I feel good about my setup.”

Power’s teammates Josef Newgarden and Juan Pablo Montoya were third and fourth, with Andretti Autosport’s Marco Andretti breaking into fifth as the session came to an end.

While the first session ran cleanly, the second session was stopped four times. The first red flag came out for simultaneous but separate incidents. Charlie Kimball’s No. 83 Novo Nordisk Honda stopped on course at turn six while Josef Newgarden’s No. 2 Verizon Chevrolet made contact with the barriers in turn one. Both drivers had minimal damage and rejoined the session.

The second and third red flags were for a track inspection, while the fourth and final stoppage was for Tony Kanaan, who made contact in turn 1.

The stoppages combined with the availability of push-to-pass to create a flurry of activity in the final hour, with several drivers taking turns at the top of the speed chart as times dipped into the the 1:07 bracket, with Power’s fastest lap roughly half-a-second faster than Takuma Sato’s quick time from the morning session.

Times from the second session are below. 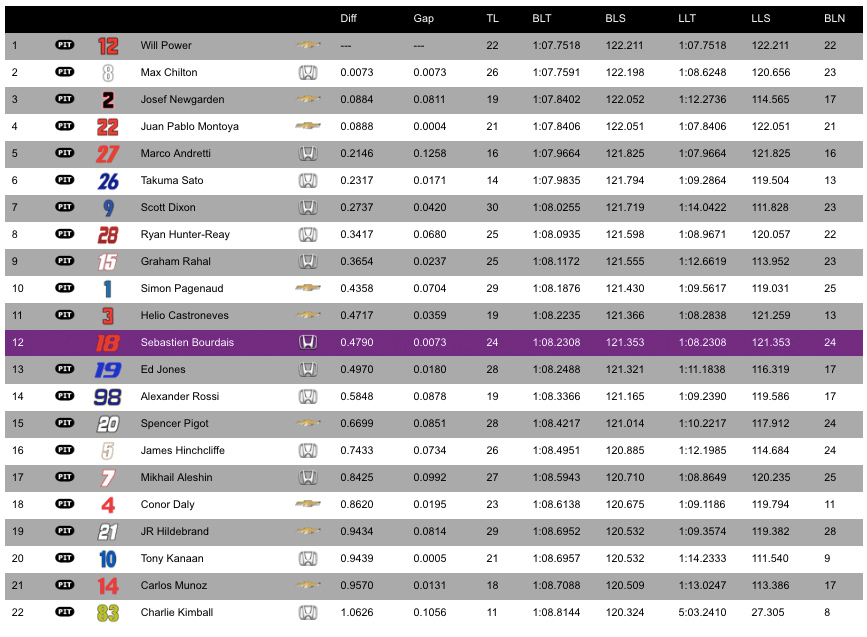