File this one under the “cool, new and different” category: Spencer Pigot’s usual No. 20 Fuzzy’s Vodka Chevrolet will have a different primary sponsor this week, as the backing of his Ed Carpenter Racing entry shifts from alcohol to a canine.

Loki the Wolfdog, something of an Instagram sensation with more than 1.4 million followers on the picture-heavy social media platform, will serve as primary sponsor of Pigot’s No. 20 Chevrolet this weekend at the Toyota Grand Prix of Long Beach (Sunday, 4 p.m. ET, NBCSN).

Pigot and fellow Rising Star Racing-supported driver Neil Alberico, who competes with Carlin in the Indy Lights Presented by Cooper Tires series, got connected to Loki and the opportunity snowballed from there. Loki’s owner Kelly Lund documents the dog’s adventures, and Loki has been contracted to work with key brands such as Google, REI, The North Face, Toyota and Mercedes.

“Loki is basically the coolest dog out there, and he’s a serious force when it comes to connecting household brands with that elusive millennial audience,” Art Wilmes, founder of Rising Star Racing, said in a release. “We decided to team up with him to spread the word about our drivers, the Verizon IndyCar Series, and the Mazda Road to Indy. We’re beyond pleased to have Loki with us on Spencer Pigot’s car for the Toyota Grand Prix of Long Beach. RSR is stretching the boundaries of promotion once again by combining the coolest canine out there with our wheel-man Spencer Pigot.” 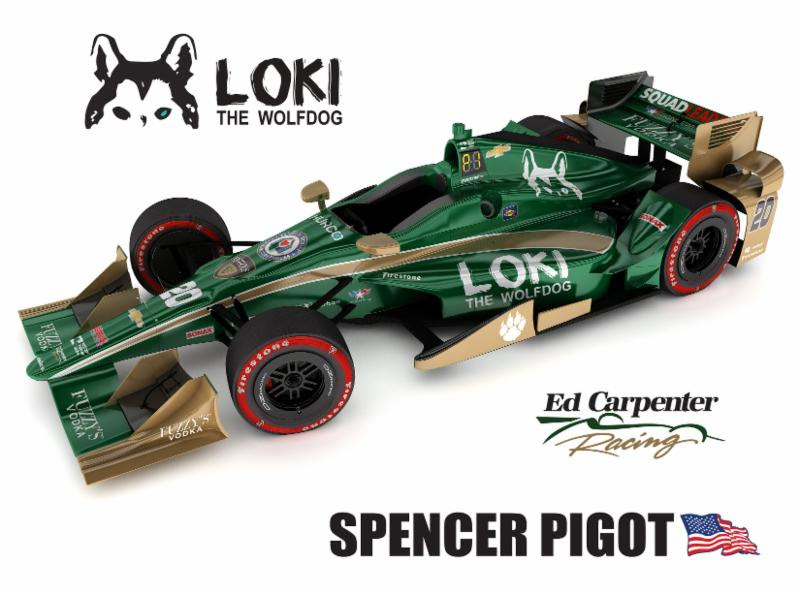 Lund added, “Loki and I are all about new adventures, and getting involved with Rising Star Racing and its drivers is the next big trip for us. My life with Loki is unconventional, and I was drawn to Rising Star Racing because they’re taking a unique look at the racing world and making a huge difference in the lives of these drivers. I never thought I’d see Loki’s face on the side of a race car, but we’re beyond stoked and can’t wait to see Spencer (Pigot’s) car when we get to the track!”

As noted, Loki and Lund are expected to be in attendance at Long Beach.

“It’s going to be great to have Loki with us this weekend in Long Beach,” Pigot said. “His following on Instagram is incredible, and I really hope he enjoys his time with us in the Verizon IndyCar Series paddock. Loki has an adventuresome spirit and I think this will be a really special experience for both of us. Rising Star Racing is providing another creative way to generate exposure and I’m really happy to be part of it.”

With Preferred Freezer Services as primary sponsor for JR Hildebrand’s No. 21 Chevrolet, it’ll be a weird, Fuzzy’s non-primary weekend for Ed Carpenter Racing at Long Beach.

As far as we can recall, this is the first dog-related sponsorship in racing since the Dogecoin effort backed Josh Wise in NASCAR a few years ago, and Wise made a surprise trip getting voted into NASCAR’s All-Star Race thanks to the popularity of the Dogecoin supporters.