The Verizon IndyCar Series hits the streets of Long Beach this weekend for Round 2 of the season, for the first of 12 races you’ll see on NBCSN this season. NBCSN carries Rounds 2 through 4 from Long Beach, Barber and Phoenix, and resumes from Round 9 in Texas through to the season finale, Round 17, at Sonoma.

IndyCar on NBCSN analyst Townsend Bell checks in again with NBCSports.com for a few predictions and thoughts heading into the year. Coverage from Long Beach begins with free practice two on Friday at 5 p.m. ET, with qualifying coverage Saturday at 7:30 p.m. ET and live race coverage on Sunday at 4 p.m. ET, all on NBCSN. Tune-in and streaming details are here.

An archive of previous “Ten with Townsend” Q&A pieces can be found here – and here is a 10-question Q&A leading into Long Beach this weekend. As always, we thank Townsend for his time and insights. He’ll be in the booth with Rick Allen and Paul Tracy this weekend.

MST: Were you surprised by Honda’s improvements at the season opener at St. Petersburg? Would you say it’s more from Honda’s engine development or different spec, Chip Ganassi Racing’s switch or a combo of both?

TB: Honda really looked like they had good momentum in the second half of last season and that obviously continued through the off-season. A little more surprising was that the Penske/Chevy combination had not matched the Honda offseason progress to maintain the advantage. But I wouldn’t count them out for long. After all they did have pole (Power) and second place (Pagenaud) at St. Pete. All in all, I think we’re in for the fiercest battle in years for the championship.

MST: How do you think defending champion Simon Pagenaud will fare this year? Did his mindset change much over the course of his title winning season?

TB: I think he’ll be just as strong as 2016. Maybe even a little better on the ovals where he really came alive last season. It’s a process to accumulate the knowledge on ovals and he has served his time.

MST: Of all the driver changes for 2017, seeing Josef Newgarden to Penske and Sebastien Bourdais to Coyne were the big ones. Did you think Bourdais could win this year and if so, did you think it’d be this early straight out of the box?

TB: Amazing to see what Bourdais and Craig Hampson pulled off at St Pete. Good strategy, yes, but the car looked to be worthy of the win as well. A great setup that showed with very “quiet” hands from Bourdais on the steering wheel over St. Pete’s bumpy surface. Ovals have never been Bourdais’ cup of tea but he will push himself to seize the moment, especially if he’s leading or fighting for the points lead. I would not be surprised to see another win at Long Beach. Especially with that Honda oomph down Shoreline Dr.

MST: How much time does it usually take for a driver to adapt into a new team? Explain the process of how a driver integrates in w/his or her new team, engineers, etc.

TB: It can happen overnight (like Bourdais falling back into the groove with his old engineer/team) or it can never really happen. That ‘gel’ or chemistry is essential to delivering the result. You see that in other partnerships for success – i.e. Power/Faustino, Pagenaud/Bretzman, Dixon/Simmons. I think that’s what makes it tough for young drivers. In general, either A. the team thinks they know who is best engineer for them or B. the driver thinks he knows who is best, but the team doesn’t trust the driver yet

MST: How much better should Andretti Autosport be this season with the engineering changes they made? They already had positive signs at St. Pete.

TB: They had to make some changes and it looks like Michael made the right call. I wouldn’t be surprised to see RHR back up his storming drive at St Pete with a podium at Long Beach.

MST: Who’s a driver or two you could see having a breakout season?

TB: Bourdais would be the easy pick. A re-breakout of sorts.. It would also be great to see another American pop from the Pigot, Daly, Rossi, Hildebrand pool. Just can’t put my finger on who just yet.

MST: Who’s under pressure to perform this season?

MST: The Long Beach race distance is extended this year from 80 to 85 laps. Do you think that will help improve the race to avoid the similar fuel-saving like last year?

TB: Dixon breezed his way to 28-lap stints last year under full green conditions. So 28 x 3= 84. Little yellow and we’ll see some 2 stop gambles for sure.

MST: Long Beach is a home race for you more or less. What’s the magic of Long Beach as one of the crown jewels on the IndyCar schedule?

TB: Spring kick-off in the land of happiness. We like electric cars, organic coffee, and free-range turkey…but deep down, we can’t ignore the basic instinct of man, fire, and war. Bring on the Beach!

MST: Lastly, what kind of tricks do you and PT have up your sleeve for another season of IndyCar on NBCSN?

TB: First step of the planning is getting PT to actually show up for a conference call. Baby steps for ‘Thrilla,’ who ‘chilla’ a bit too much this offseason. 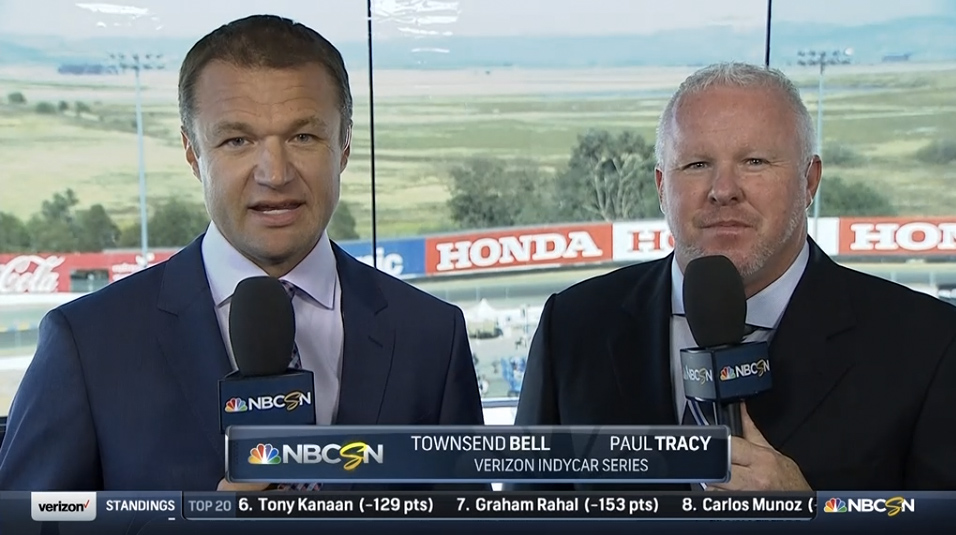