LONG BEACH, Calif. – The Honda pace that kicked off the 2017 Verizon IndyCar Series season at the Firestone Grand Prix of St. Petersburg continued in the opening 45-minute practice session for this weekend’s Toyota Grand Prix of Long Beach.

Scott Dixon took his No. 9 NTT Data Honda for Chip Ganassi Racing to the top of the timesheets near the end of the session with a best time of 1:07.6357 around the 1.968-mile street circuit.

Dixon won here in 2015 for the first time and was frustrated to end in second last year after Simon Pagenaud’s pit lane exit from his final pit stop drew a warning, but not a penalty, from INDYCAR Race Control.

Helio Castroneves broke up an all-Honda top-six, as the two-time defending polesitter took his No. 3 AAA Chevrolet for Team Penske to second right at the end of the session at 1:07.7679.

St. Petersburg winner Sebastien Bourdais was third in his No. 18 Sonny’s BBQ Honda for Dale Coyne Racing at 1:07.8187 with James Hinchcliffe fourth and Will Power, a two-time Long Beach winner (2008, 2012) in fifth.

Per IndyCar Radio, Max Chilton was sidelined a bit, with electrical issues putting pause to most of the session in his No. 8 Gallagher Honda.

The session ran without any red flags although a couple cars ran into the runoff area (Dixon, Kanaan, Hinchcliffe and Mikhail Aleshin were captured by the cameras).

Times are below. Second practice is LIVE on NBCSN and the NBC Sports App (stream link here) from 2 p.m. PT and local time, and 5 p.m. ET. 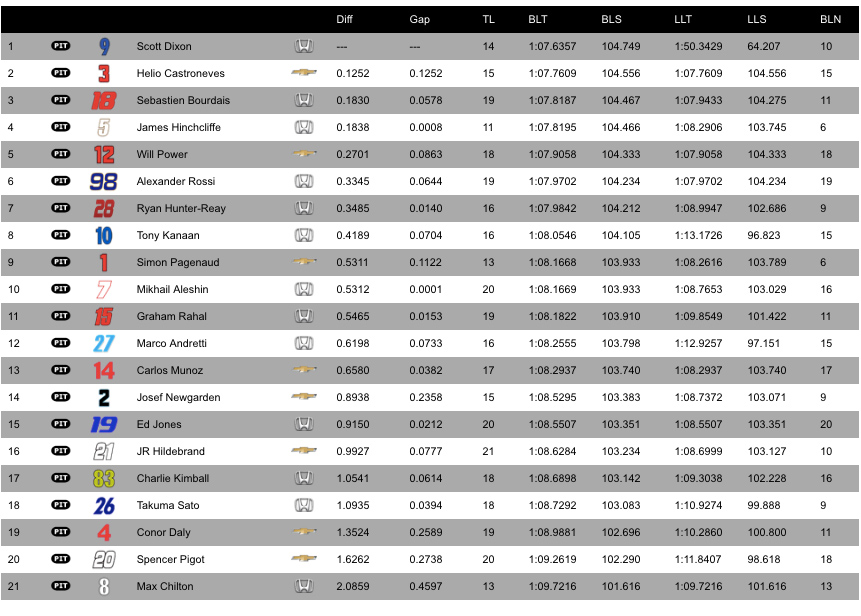 One of most everyone's favorite events – @ToyotaGPLB! Join us all weekend on @NBCSN including live practice 2 today at 5pm ET. @IndyCar pic.twitter.com/8eKO0lNMPA