After Honda dominated the opening practice for Sunday’s Toyota Grand Prix of Long Beach, it was Chevrolet that seized control in second practice. Team Penske’s Will Power put his No. 12 Verizon entry atop the time charts in the afternoon with a lap of 1:07.08, almost three tenths of a second faster than anyone else. Power’s quick lap came in the second half of the session, which many drivers spent running on the softer red tires to prepare for qualifying tomorrow. “The car’s not bad,” Power told NBCSN’s Marty Snider after the session. “We’ll see when qualifying comes. I feel we found a better balance on the car.”

Honda continued to show strong pace, however. Andretti Autosport’s Marco Andretti ended the session in second, again showing a vast improvement over his 2016 form. “We’re confirming what we’ve seen through testing. I don’t remember feeling this strong in the offseason,” he told NBCSN’s Kevin Lee when asked about his increased speed.

Simon Pagenaud made it a Penske 1-3 by ending the day third, while Takuma Sato and Ryan Hunter-Reay ended up fourth and fifth, putting three Andretti Autosport cars in the top five. Hunter-Reay explained that the team’s engineering is working very closely, which has helped address their struggles on street courses. “Now we’re all in one truck and it’s different now,” Hunter-Reay told NBCSN’s Katie Hargitt. “We’ve put the engineering units into one. We’re picking up where we left off.

The session ran relatively cleanly, although there was a brief red flag in the final minutes for Tony Kanaan, who overshot turn one and stalled in the runoff area. While Kanaan was restarted and finished the session, it capped an eventful day for the Chip Ganassi Racing driver, who brushed the wall on an earlier run and needed to pit for repairs before continuing. 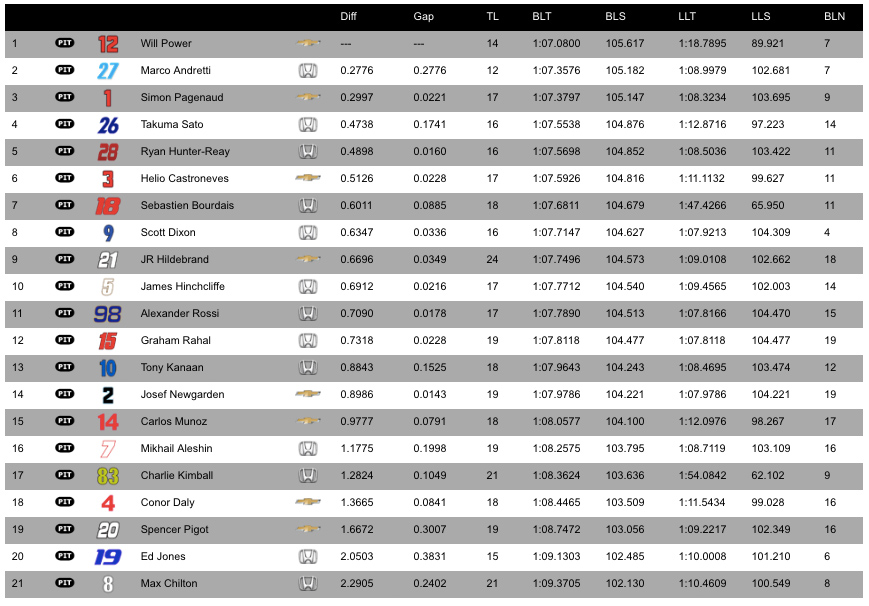